Welcome to the first monthly post of 2017 elaborating on the featured photos in my “Baby Boom!” calendar. I decided to create two calendar choices for this year because I saw no way I could reasonably ignore the explosion of births at the Toronto Zoo over the previous 15 months or so, but at the same time I knew there would be a few returning customers who would prefer to purchase the style of calendar to which they had become accustomed: a general array of animals of all ages. This turned out to be true, so I am glad I went to the trouble of providing a choice; however, it wasn’t completely altruistic: more than a few people decided to buy one of each calendar in this special year. I shall have to bear this in mind for the future (he cackled, rubbing his hands together in glee). For now, though, it has also doubled the number of posts I will have to make over the year so…I would say it all evens out in the long run! One important detail concerning the placement of the images in the 2017 “Baby Boom!” calendar: if I knew the birth month of the baby I wished to feature, his or her (or their) photo appears on that month in the printed edition. The only exceptions are May and December; however, there is at least a reasonable chance that the May animal was indeed born in that month as well.

And now, without further ado, I present to you the story of Nneka – the western lowland gorilla who was born in the wee small hours of January 10, 2014, to Charles and Ngozi.

The original uncropped image of the above photo

Nneka’s story does not have a particularly happy beginning – for me, that is. Her birth seemed to be without incident and visitors to the gorilla exhibit in the Zoo’s African Rainforest Pavilion during the day of January 10, 2014 were treated to the heart-melting sight of Ngozi proudly displaying her second-born child in full view of everyone. That day happened to be a Friday, and I had been scheduled to lead a tour as I am a member of the “Fabulous Friday” team of Volunteers. Either early that morning or late the evening before, my mental state became such that I thought I would not be able to lead an effective tour for my young charges; therefore, I prevailed upon my good friend Karen Pollard to help me out and take on my duties for that day – which remained until this past September the only shift I had ever had to bail on in my entire tenure at the Zoo. It’s safe to say I learned my lesson that day, because I received a phone call from Karen in the early afternoon in which she thanked me for “letting” her lead my tour for me. Of course I assumed she was being facetious, so I asked her how bad the group was behaving…but she assured me she was 100% serious in her thanks. I was quite puzzled by this call until she then told me that she was standing in front of a brand-new baby gorilla who was born just the night before. Which I missed because I had given my shift away. Sigh. (Bonus note: I still haven’t completely “repaid” Karen for this phone call; I’ve yet to come up with anything devious enough to fit the bill!) 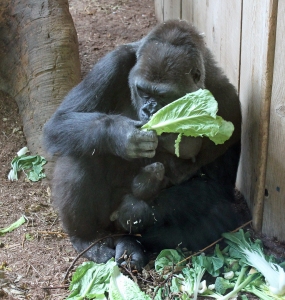 She didn’t put her baby down for weeks

However, it did not take me very long to capture some images of the wee gorgeous primate. The following Wednesday – January 15th – I braved a snowstorm (as I recall) and drove up to the Zoo from our then-home in East York for a chance to snag a few shots for myself. It’s quite dark in the main gorilla habitat and a snowy day only exacerbates that lighting problem. Add to that the tall glass in front of the open part of the exhibit (and Ngozi’s preference to sit in the shade of a tree most times, likely in deference to her baby’s need for protection) and the situation was a very tricky one for such a neophyte DSLR user as myself. I positioned myself in an area where I could aim my lens as much over the glass as possible, steadied myself and the barrel of the zoom, opened the aperture as wide as I dared, and waited for a chance to see Ngozi and baby being as still as possible. It took quite a while but I was lucky enough to capture a couple of images that I was satisfied with – once I uploaded them to my PC and played around with the exposures in Photoshop, that is.

As I put my camera back in my bag and prepared to walk back out into the winter storm, an absolute miracle occurred. The accessibility doors swung open and through them shuffled a large man bundled up against the cold, lugging what seemed to be in the neigbourhood of 100 kilos of cameras and accessories as he trudged around the Zoo. He appeared quite sombre – which, come on now, if you are doing this as a hobby and you don’t enjoy it, maybe choose a different hobby? And if you’re doing this as a profession, and don’t enjoy it….ditto. In any event, he reached approximately the same spot I had been standing in just a few moments before, put his heavy equipment down, and began to assemble the tools of his trade. He raised one of his cameras – with an impressive and extremely expensive-looking zoom lens attached – over his head, aimed it towards Ngozi and baby, and took a quick reading of the necessary settings. He then attached this camera to the biggest tripod I have ever seen (on a still camera, at least) and began to raise the platform higher and higher and ever higher into the air until not only was the lens clear of any obstruction from the window, but quite close to being obstructed by a few panels from the roof of the building. He then pulled out his phone and, using an app which displayed the camera’s view, made various adjustments to the tilt and pan of the platform until he was satisfied with the image he was viewing. Then he took a remote shutter release from another pocket, sighed a little, and prepared to wait for Ngozi to turn around and face the camera with her little bundle in her arms. I was far too fascinated by all of this to leave so I, too, waited for a few minutes. Eventually Ngozi began to turn toward us and the tiny primate swing into our view. Then suddenly, with the press of a button on the remote, our intrepid photographer caused his camera to snap into action, and a barrage of “snap-snap-snap-snap-snap” sounds reached my ears. It was at this precise moment in time that a bulb as light as ten of our suns went on in my head and I did the only logical thing: I slapped my head (as if I were in one of those V8 commercials) and yelled out, “of course!!!” I’ve often wondered if that man found it necessary to go for some sort of PTSD therapy after that, because I am quite certain he had no idea I was still there watching him, let alone that I was going to make a sound roughly equivalent to a gunshot behind him and shout at the same time. I hope it all worked out for him. As for me….well, it simply changed my life. Up until then I had never considered setting my camera on “burst” mode because I was a child of the 35mm era, when adding an “autowinder” to my camera would have cost me about a trillion dollars in film each year. But with digital? Not an issue. I found my camera’s manual, made the change to auto-shooting, and I’ve never looked back. It’s one of the biggest “eureka!” moments of my entire life. 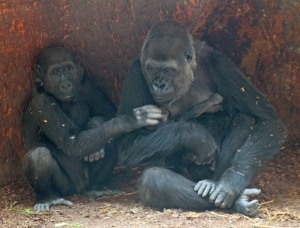 Early on it was surmised by the supremely intelligent keepers that the new baby was a girl by the way she peed. They were, of course, proven correct when the vets were finally able to determine the sex of Ngozi’s little one and eventually a naming contest (decided, ultimately, by Charles the troop’s silverback) bestowed her with the beautiful moniker “Nneka” (“My mother is supreme”, in Igbo). The Zoo has a tradition of ensuring that the names of offspring of the gorillas begin with the same letter as that of their mother (Nneka’s older brother, pictured above, is named “Nassir”). Josephine and her daughter Johari still reside in Toronto; Sadiki is the son of a departed female by the name of Samantha. Nassir has been a terrific big brother: doting and tender and patient. Recently he has been separated from his sister in order to help begin a bachelor troop with Sadiki; even though there really was no other decision that could have been made, it’s still a little sad that Nassir is no longer able to spend time with the sister he clearly adores.

I will leave you with a few more photos of the precious Nneka in the early years of her life, but first I must tell you: next month will feature my absolute favourite baby of all that have been born at the Zoo this millennium. That seems only fair, though, considering this little guy’s mom is my favourite animal who lives at the Toronto Zoo right now. See you in February! 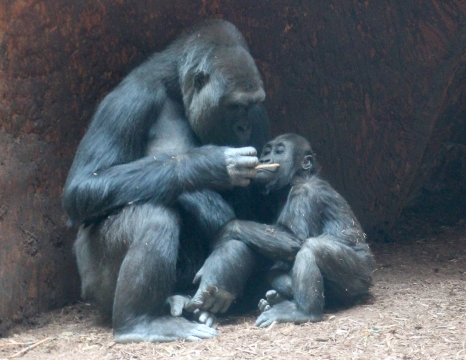