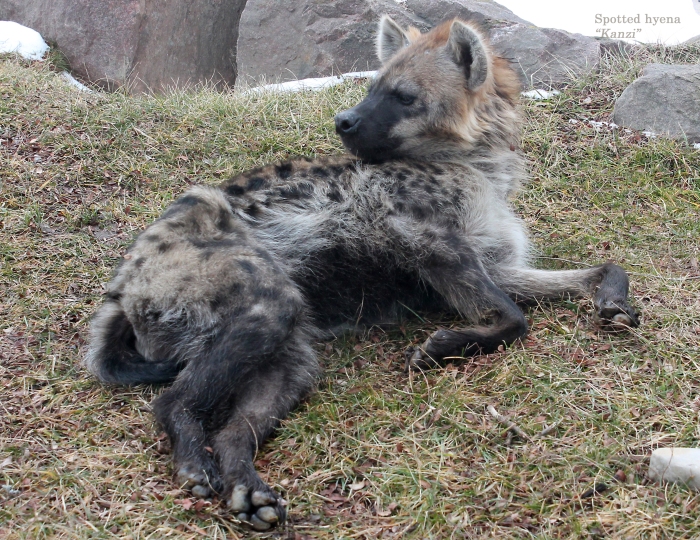 Ah, Kanzi. Perhaps no animal at the Zoo loves me more than this sweet girl. Nearly a year after our first chance meeting she still looks up sharply when she hears my voice or catches my scent, and comes directly over to see me at whatever empty window I make my way to. I adore her as well. 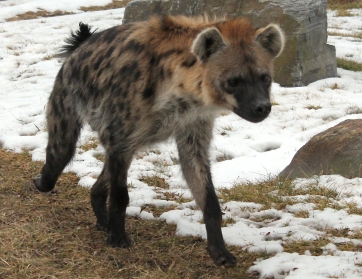 Kanzi exploring her domain for the first time

Through the winter of 2015-16, the white lion cubs (who will be featured in September’s post) were too small to be out on the main exhibit, but far too popular and cute to be off display entirely. A compromise was found and for a few precious months we were all – Staff, Volunteers, and members of the public alike – allowed to walk through the Keeper door at the front of the exhibit and proceed down the road to the lion house for a couple of hours each day to watch Makali and her four boys play together outside. As March dawned – and because it had been an unusually warm winter – news reached us that the time was fast approaching to give all seven of our white lions access to the big exhibit. At the beginning of the second week it seemed likely their first day was imminent so on that Monday, March 7, I headed up to the Savanna to see what I could find out. On the way I encountered the Lead Hand for the area, Brian, who told me that the cubs would probably make their appearance on the Wednesday. This was exciting news indeed but why, I asked, was Brian standing out there? “Oh, we have a new, young hyena by the name of Kanzi,” he said. “This is her first day on exhibit – she’ll be four years old later this month – and I’m just observing her to make sure everything goes well.” “She’s beautiful!” I exclaimed. “Do you mind if I hang around with you and watch her for a while?” “No problem!” he replied.

And so it began. 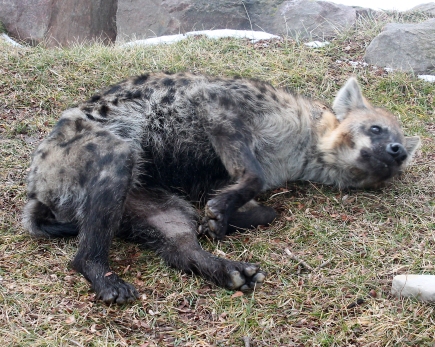 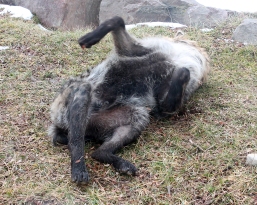 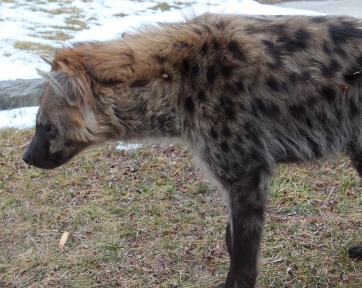 I know I spent a couple of hours with her that day. Time flew by so I don’t really know exactly how long it was, but it was enough time for Kanzi to settle in very nicely – as you can see from the mosaic above. There are three other spotted hyenas at the Zoo – two boys and a girl – but none of them had ever shown me anything approaching this level of socialization and calmness. For the first little while, Kanzi did walk around quite a bit and vocalized in several different ways (most of which I’d never heard before and have not heard since), but once she was satisfied with her boundaries she spent the majority of her time studying and interacting with Brian, me, and the few members of the public who happened to pass by on that quiet Monday morning. Her interest in us fascinated me so I hardly took my eyes off of her and talked to her every time I had her attention. She seemed to frequently present her ear or shoulder or other parts of her body to us tightly pressed against the glass; I’ve learned that she was hand-raised at the Buffalo Zoo (and was, in fact, a bit of a “miracle baby” because her aggressive mom did not treat her other offspring very well) and very likely enjoyed her fair share of “skritches” while she was there. I was afraid she would quickly grow frustrated by my inability to reach her; a year later, however, and it still has not presented a problem for us. 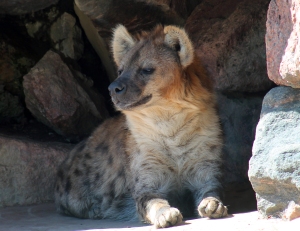 Hyenas, in my opinion, suffer from a bad rap (think of The Lion King) and the ones at our Zoo have fascinated me for a while now. As luck would have it, too, this past weekend our wonderful Keepers – Rebecca and Julie – were slated to give a Volunteer Talk on the lions and the hyenas; sadly, Rebecca was ill but Julie stepped up brilliantly. I now have far more information than I expected to have for this blog piece! For example: I knew that spotted hyenas – the largest of any hyena species – were not really “scavengers”; however, I now know that they actually hunt and kill up to 95% of what they eat. I now know that the older gal, Pinduli (11 years old, pictured here) came to us from Buffalo as well. The elder of the two males, 18-year-old Moja, is missing one toe on his front right foot (I believe from before he arrived here from Busch Gardens) so that makes it a lot easier to tell him from the others. I’ve long known they are a matriarchal society where the females choose whom they want to breed with – and are substantially bigger – but I now know a little more about the birthing process than before…and I’ll share that info shortly. 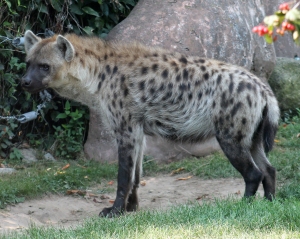 Echo – what a great name

The handsome lad pictured at right is Echo, who was introduced to Moja and Pinduli together a couple of years ago. I took one of the Volunteer shifts to observe their behaviour and it didn’t go particularly well early on until Echo did something quite remarkable: as he was being pursued by the other two at one point he dashed off and burst through the “hot wire” ringing the exhibit in front of the tall fence and ran into the brush there. Moja and Pinduli skidded to a halt, looked at each other for a moment, then returned their gaze to Echo with obvious new-found respect. It was as if they thought he must have some sort of superpower to be able to go through the wire unscathed. From that point on, all three settled in quite nicely, if not warmly. It was quite an amazing thing to witness. Echo, by the way, is about a half-year younger than Pinduli and I believe the original hope was that she would breed with him, but there’s been no luck in that area. That’s why Kanzi was sent in; she hasn’t been “formally” introduced to Echo as of yet but the hope is they will bond and produce an adorable litter some day. I’ve already heard Echo vocalizing from the back when Kanzi has been in heat. It’s a powerful whoop.

So. About that birthing process. Hope you’re ready. 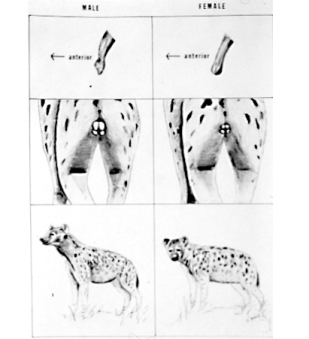 Well. I mentioned that the females dominate this society and that they select their own breeding partner. Even though they are bigger than the males, however, if their sexual organs were the same as most other female mammals they would still run the risk of an “unauthorized” male planting his seed in her against her wishes. (Yes, effectively “raping” her.) So the female genitalia is a pseudophallus, which effectively eliminates that sort of “accident”. Brilliant, no? Well, let me continue. When a spotted hyena gives birth – typically to twins – the cubs must pass through the penis in order to exit the womb. Usually this results in some tearing from the first cub and I have to say, I think I’ve crossed and recrossed my legs about six times just writing out this paragraph. *shiver* In any event, that’s how it works in hyenaland and it can cause visitors to the Zoo some confusion when they are trying to work out which of the four in the collection they are seeing at any given time. This has likely also created some issues when I’ve spoken to the public about Kanzi, because early on I failed to mention this one important fact and I am virtually certain that I left a few groups behind me who took one look at Kanzi’s “package” and immediately dismissed me as some kind of lunatic.

All of the close-ups here were taken by my wonderful friend, Sue Maynard, back in April of last year. Sue has a fantastic blog on Word Press as well entitled My Wild Life Awakened; please check it out when you can! 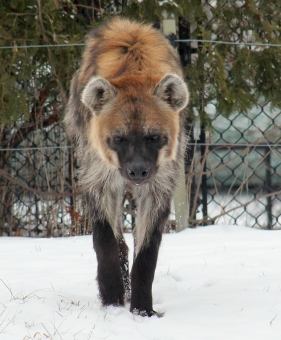 She will even come to me through snow!! ❤

I love heading up to see my sweet Kanzi whenever I can, or at least check to see if she’s on display. No matter what the weather, no matter how long it’s been between visits, no matter how she’s feeling – she always comes straight over to me once she knows I’m there. Mostly we head for one of the two panels (one at each end of the exhibit) where there is a tiny gap at the bottom so she can smell me and hear me better. She always tells me a long and involved story in a low, sweet growl which is very much like a purr. Sometimes when I touch the glass where her nose is pressed she yawns and closes her eyes as if I’m actually stroking her while she naps. I especially love showing up in “civilian clothes”, so it seems as if I have no connection to her whatsoever, and having her leave a crowd of people to come play with me. When the crowd invariably follows her and reconvenes around me, I begin to tell them her story and the story of her species. (And now, as I mentioned earlier, I make sure I mention the pseudopenis so they understand I’m not just making everything up.) I feel pretty confident in saying that if I were attending a Zoo with my family at a very young age and I saw some random dude having an unexpected conversation with a hyena, I would remember that moment for the rest of my life. I hope that’s the same for the kids who have been entertained by witnessing one of our encounters. 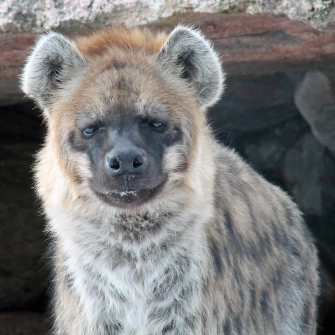 One more cool thing has happened between Kanzi and me; it took place last August 24th during an incredible “Keeper for a Day” experience I won at a silent auction on Lion Awareness Day earlier in the month. The Keepers gave me the greatest experience I could ever have asked for, and at one point we were all in the hyena house before their exhibit opened for the day. It was time for a small snack for each of them and three went about their business like it was no big deal to have a visitor. But one of them – bet you’ll never guess which one – was simply too excited to eat because we were finally within smelling distance of each other and she couldn’t calm down. She kept jumping from side to side and pushing her fur up against the door, clearly hoping for some contact which I, of course, was unable to provide. That didn’t seem to faze her, though, which I was relieved to see. It was a quite incredible treat to see just how different these beautiful animals acted versus what one might expect to see from them.

I’ll leave you with one last photo taken by Sue, one that is far and away my favourite of all my photos of Kanzi and me together, and neck-and-neck with one of Humphrey and me on his 1st birthday as my favourite animal interaction shot of all time. And I’ll let you know that the picture for April is one I had tried to get for years and one day there was a “perfect storm” of conditions that made it absolutely perfect. Happy March! 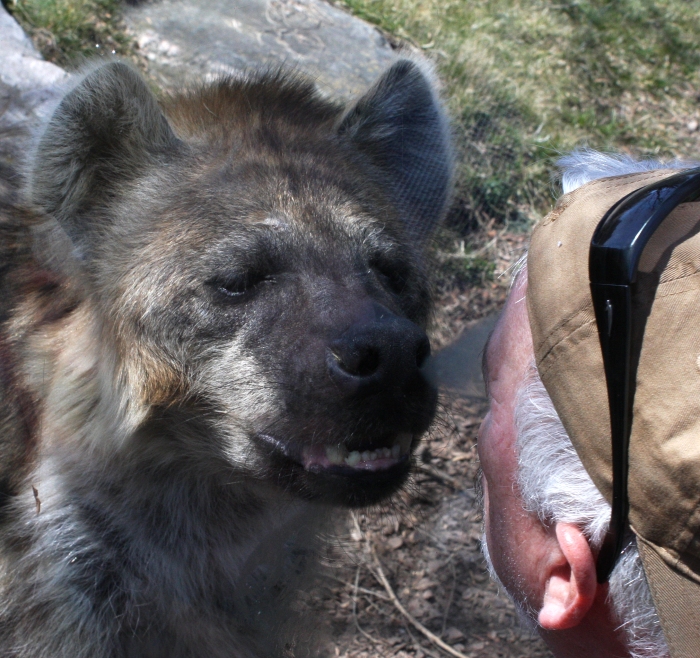 If not for the small patch of fog on the glass, one could think we were rubbing noses here