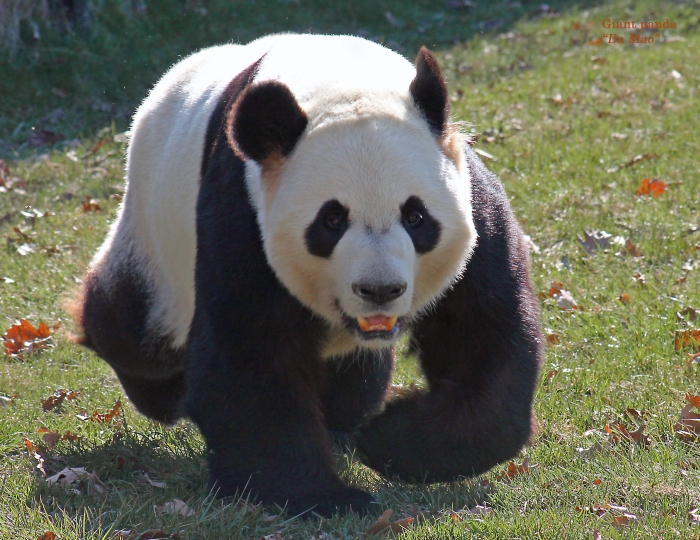 Da Mao out for a trot

I love those ears!

I’m going to need to be a little careful with this month’s post. There’s a very strong temptation to talk about all of the pandas at the Zoo and that would be rather unfair to those of you waiting for a later post in the Baby Boom! series. In any event, I did touch on the babies already in a post I made on my other blog site when I featured Er Shun in March of last year. If you would like to read it, you can find it here. In the meantime, I do have some Da-Mao-specific stories to share with you in this post. Let me start by telling you about the shot that I used for the June 2017 page, featured at the top of this page. I took that photo in April 2016 on an unseasonably warm day (little did we know that was a harbinger of the Spring/Summer/Fall to come) when I had arrived at the Zoo first thing in the morning to try to grab some shots of the little ones before it got too crowded. Er Shun and her children had not yet come out on exhibit, so I set off to find the big guy while I waited. I couldn’t find him at first, but then I caught a glimpse of him walking along on the far side of his enclosure.

Who could that be?

He came around to a more visible spot, near a hammock he likes, and proceeded to do some stretching exercises.

This is how a panda does calisthenics, apparently

After that he had a short munch on some tasty bamboo.

And then it was back off to his walking track.

Back to the workout 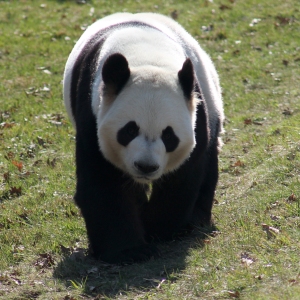 Pause for a breather

I walked around to the viewing window at the north side of the enclosure and watched this big fuzzy goofball trot towards me, then walk away more slowly, then turn and trot a bit faster back toward the window again. I got the feeling this was a show he was putting on exclusively for me, because I was the only one there and he seemed to lock eyes with me each time he began to canter. It was quite an experience! He repeated this several times until he finally grew bored or tired or both, at which point he climbed into the wooden jungle gym close to the window and sat there for a few moments. I only had time to grab a quick shot of him (at left) before he was off again – this time around to the front of the exhibit and his large pile of bamboo shoots and leaves. Still, it was a rare opportunity to see him up and about on a warm, snow-free day. Much of my footage of Da Mao has come during winter months; not only because he is more likely to be active (or, at least, not asleep) when it’s colder, but also because the softer light of a winter sky makes it easier for my camera to pick up the details of his eyes, it seems to me. 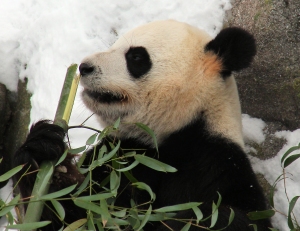 It has to be juuuuust right

I’ve tried my darnedest to capture Da Mao in the act of tobogganing himself down a snow-covered hill, but have had no luck thus far. In fact, the solitary time I saw him slide down a snow ramp in person I was leading a tour of schoolchildren and was so excited they were concerned something was actually wrong with me! There is quite a bit of footage of him playing in the snow caught on security cameras which has been posted on the Toronto Zoo’s YouTube account, though. My two personal favourites are this fantastic flop and this snowman attack, the latter of which I dubbed “♫Panda Wants to Kill a Snowman♫” which, of you sing it like “Do You Want to Build a Snowman?” from the movie Frozen, is actually pretty darned funny whether you happen to think so or not. You may have to trust me on this one. 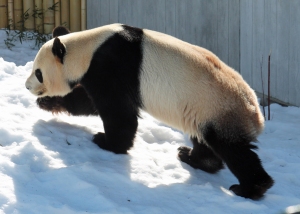 I do have one very funny story to share with you, though, but there is no video to accompany this. During one of our Volunteer meetings at the Zoo last year, the lead Panda Keeper gave us a presentation about the breeding process between Da Mao and Er Shun that ultimately led to the cubs being born in late 2015. Pandas are notoriously difficult to breed in captivity; there are myriad reasons but a not inconsequential one is that female giant pandas are only in oestrus – or “heat” – for a few hours each year (between 36 and 72, usually). This means that Keepers must be monitoring the females extremely closely so that the male can be introduced at the right time in that incredibly narrow window. Because the two pandas at the Toronto Zoo had just reached sexual maturity, everything about this process was going to be new to everyone involved. So when it became apparent that Er Shun was ready for the attempt, they place her in her “indoor enclosure” and Da Mao in the adjoining one, so she could get his scent and get used to him. We were shown a video of Er Shun pacing in her “room”, getting progressively louder and crankier as we watched. The camera angle was from one corner of her enclosure, aimed at the door between her and Da Mao. After a few moments of Er Shun pacing, there suddenly appeared at the screen above the door this big, dorky, fuzzy face, clearly saying, “Hello! Were you looking for me?” Er Shun heard Da Mao at the door and immediately turned around, spied his face through the mesh, growled even louder, and ran straight at the door, banging into it with her head and forepaws. Da Mao disappeared in a flash, never to be seen again.

“It was at that moment,” intoned the Keeper, “that we knew we were going to have to use artificial insemination.” This, of course, brought the house down.

There is one last story about Da Mao that is not, probably, common knowledge. He was not one of the original pair of pandas chosen to come to Toronto. Not long before they were to make their long journey from China, Er Shun and her partner, Ji Li, underwent some in-depth physical testing. It was only then that it was discovered that Er Shun – who was supposed to be a boy – was actually a girl! Now, as progressive as Toronto is the pandas were supposed to be here on “breeding loan” so a same-sex couple just wasn’t going to work out (Ji Li was, obviously, a girl too). Er Shun still made the trip because she and her home base have connections with Toronto; it was therefore decided that Ji Li would be replaced with a male – thoroughly vetted this time – who turned out to be Da Mao. Hopefully Ji Li was allowed to make babies with a different partner; I’ve done what digging I can but have not been able to uncover any further information about her to this point.

So that’s it for this month! Next up for July: an animal that was guaranteed a spot in a calendar marking the 150th birthday of Canada. That’s the only hint I will give you for now. Well, ok – one more: his name is “Ward.” Thanks for reading! See you soon! Oh, and goodnight, Da Mao. Sleep tight. 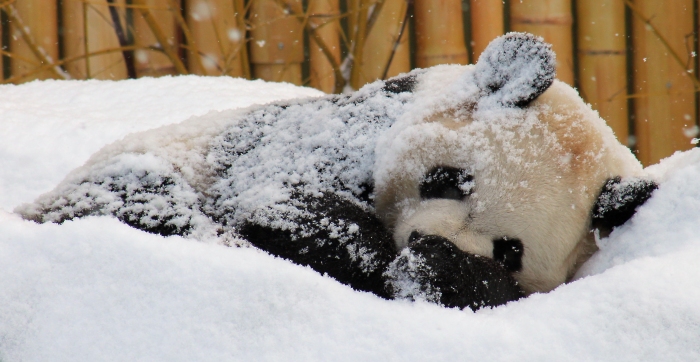