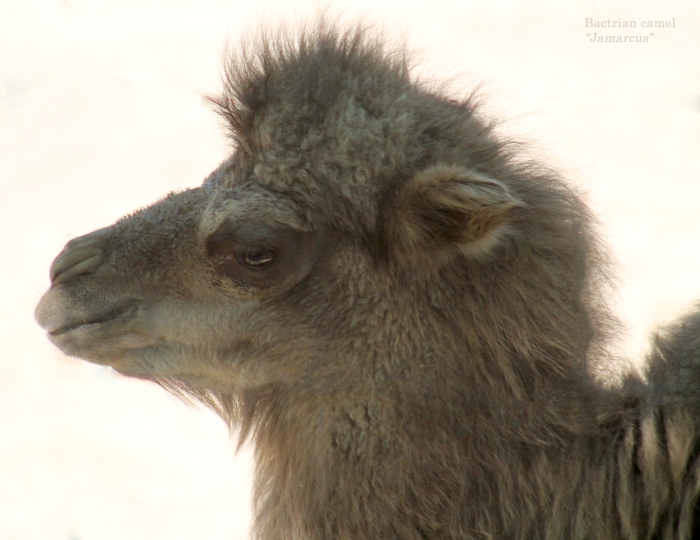 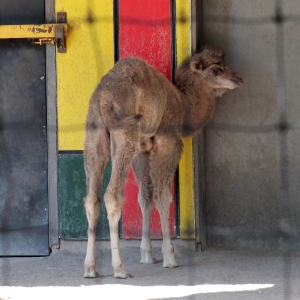 On August 24, 2016 I showed up for my second “Keeper for a Day” prizes – this time with the lion keepers (I talk about it briefly in this post about Kanzi) – which began with the opportunity to attend the Morning Meeting (“Hill Street”, as it’s affectionately known to the Keepers) in the Atrium at North Service, the Admin building at the Zoo. Among other news and updates the Keepers logs from the previous day are read out to all assembled. As luck would have it, a baby bactrian camel had been born the day before so I was among the very first people to learn about it! I don’t recall if we were told his sex or his name at this time – likely not – but I know it didn’t take long to have that information because I was already labeling photos of him by his second week on this planet. His parents were Alice and Goober (yes, seriously) and I went over to Eurasia to see him as often as I could early on because when his sister, Jozy, was born I didn’t see her until she was six or seven months old. 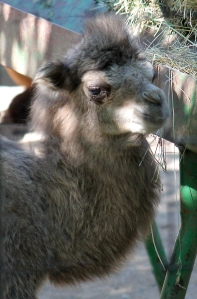 Most of my early shots of him were through the fence around the “camel palace” because by the time he would be big enough to go out on the larger exhibit it would be winter and none of the camels would be out there (likely due to slippery conditions for both the camels and the Keepers, because it clearly wouldn’t be a weather-related issue). But he was a precocious young lad from the very beginning and always seemed to be in view. In fact, he was almost too precocious because I needed him to be farther away from the fence to be able to blur it out, whereas he often came over to see the people whenever anyone was stopping by. It was pretty difficult to be frustrated with anything that cute and that close by. I don’t know if this high energy caused, resulted from, or was completely unrelated to the fact that he had to separated from his mom early on because she became too aggressive towards him. The keepers were already supplementing Alice’s nursing schedule with bottles of her milk that they had expressed themselves; it became a matter of simply bottle-feeding Jamarcus exclusively from then on. 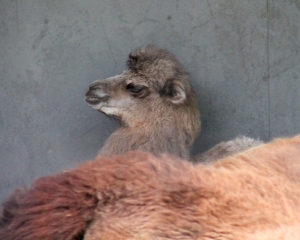 But Jamarcus was not to be totally abandoned. The Keepers decided that he should be paired with the sweetest, most laid-back adult female of the entire flock (I prefer “caravan” but it doesn’t make sense here): lovely Sally, who is typically the go-to camel for behind-the-scenes tours and close encounters in the main body of the Zoo. As hoped, the pair got along swimmingly and Sally exerted quite a calming influence on the young lad. Most of the times I visited them I saw a very similar image to the one at left: Sally relaxing comfortably and peacefully, with Jamarcus seldom very far away from her side. I would also hear Alice elsewhere in the palace area – often inside or around back – bleating to let the Keepers know it was time to come and collect some of her milk! I was lucky enough to witness a bottle feeding on a couple of occasions; however, these took place in a spot that did not lend itself to decent photos at all. 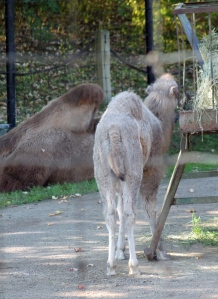 Jamarcus was eating straw at quite an early age: this photo was taken when he was just seven weeks old and was certainly not the first time I had seen him at the feeder. We had an unusually hot and dry summer here in Toronto in 2016 which extended far into the fall; I took this shot on our Thanksgiving Day weekend in mid-October. This gave me plenty of wonderful opportunities to catch a glimpse of the adorable calf without having to be concerned with him being inside and out of the cold or snow until quite late in the year. By that time, he was clearly hale and hardy enough to withstand the chill and never really had to be specially sheltered on his own. I didn’t always take photos of him, though – at least not decent ones – because of the aforementioned issue with the fencing. Also, the area around the Camel Palace is not exactly huge so my views of him became quite repetitive. I began to count the days until the flock was once again given access to the main exhibit where I could have a much better opportunity to take pictures that were relatively fencing-free. (If not actually “footloose”. *BA-doom-tish*. Sorry.) I did grab one awesome shot that the amazing Sarah was able to “tweak” for me to remove the grid-marks of the fence. It probably would have been the photo in the calendar had I taken it in time (this was shot in early January): 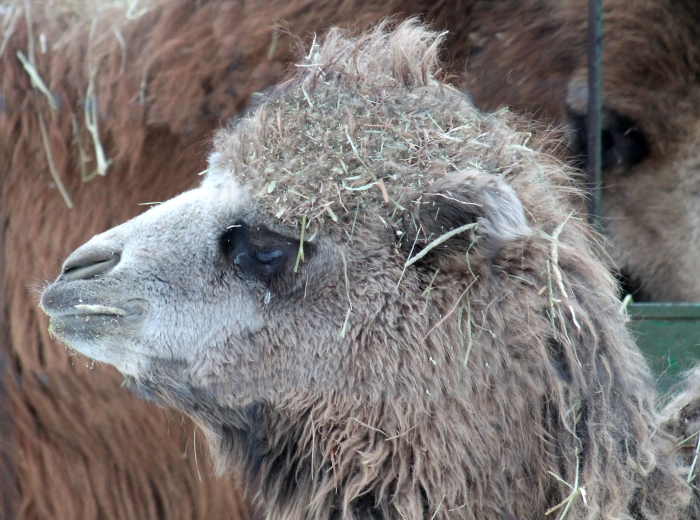 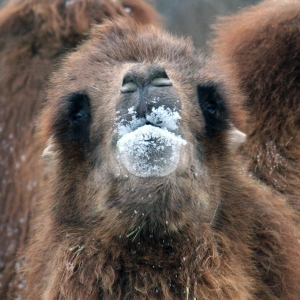 Aunt Sally in the snow

While I was waiting, I did have one really great experience with the camels. In February, the Volunteers had their annual “Winter Blahs” which is an opportunity, while the Zoo is not busy, to have a meeting and then a behind-the-scenes of our own, just as a little pick-me-up in the dark of the winter. Our Friday group was given two choices: the giraffes or the camels. I had been BTS with the giraffes on more than one occasion so I chose the camels because: 1) I had never been in the camel barn before; and b) there was a baby to spend time with! When our little group arrived we were led into the back paddock where, as expected, Sally was waiting to greet us. We each had an opportunity to come in contact with her and the Keeper, Jennifer, gave us an excellent run-down of the whole camel program since the Zoo first opened. (There’s a side-story here which I will share at the very end of this post.) When things appeared to be winding down, cognizant of the fact that we had time left for our session, I asked Jennifer if we might visit the inside of the barn since I had always wanted to see it. She said, “Of course!” and took us in there for a few minutes where we met up with Tilly (who spent the entire time trying to eat my baseball cap, to my delight) and several others. Suddenly Jamarcus made an appearance at the half-door at the front of the barn. He was his usual feisty self and mostly made life miserable for Jennifer by attempting to bite her leg when she wouldn’t pay attention to him. Despite this annoyance, she graciously allowed me the chance to pet him before we left the barn and it was absolutely heavenly. His curly fur felt soft, scratchy, and bumpy all at the same time and his chin was feather-soft. It was transfixing…until he broke the spell with one last nip at his Keeper, which was the final straw for her. Still: a wonderful morning spent with this baby!

Finally at the very end of April I headed over for the Eurasia Wilds area of the Zoo and went to the Camel Palace. The numbers there were very thin – and no sign of Jamarcus! Excitedly I quickly went along the path to the vast grassy expanse of the exhibit and found, to my great joy, Jamarcus hanging out with his Aunt Sally, his half-sister Jozy, and Suria, a two-year-old female who had arrived from Quebec before Jamarcus was born. He had been spending more and more time with the young girls in addition to Sally through the latter stages of the winter, so this wasn’t a surprise to me at all. He was considerably bigger – and very much more woolly – but he seemed to still be full of that impish delight at simply existing, which I can only imagine was increased exponentially by the new access to the hills and grassland, and full exposure to the soft sun of the early spring. He was lying tightly against Sally when I first encountered him, but after I called his name out he wasted no time in showing off his exuberance: 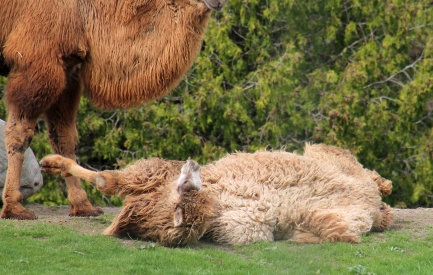 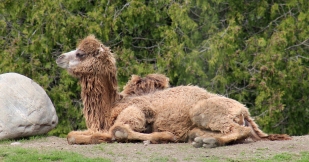 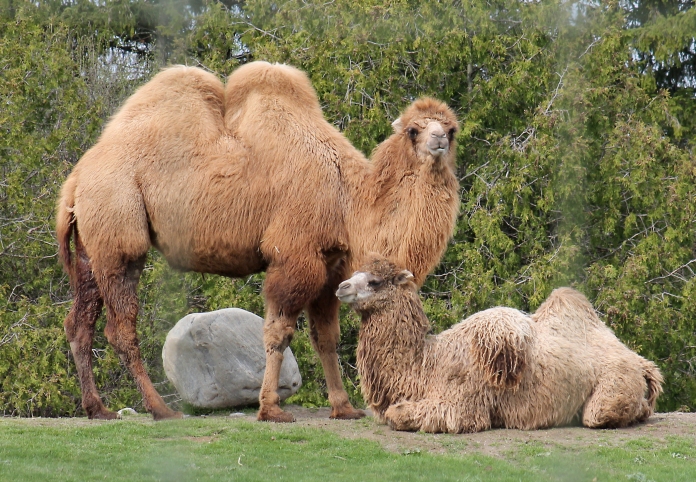 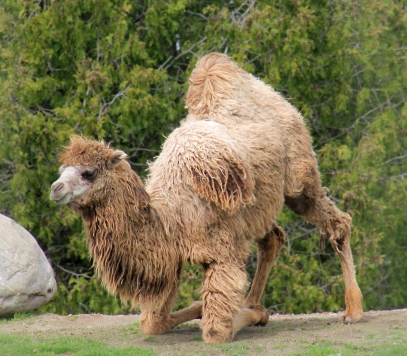 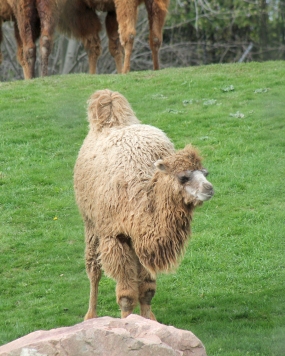 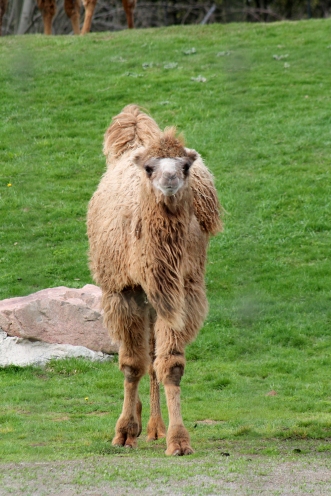 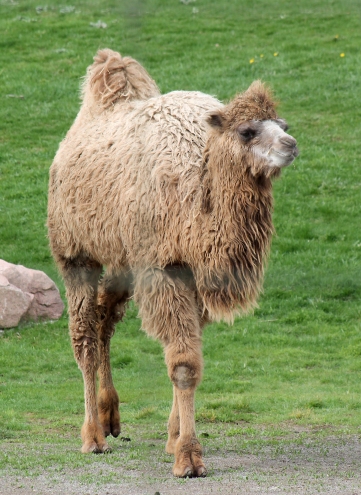 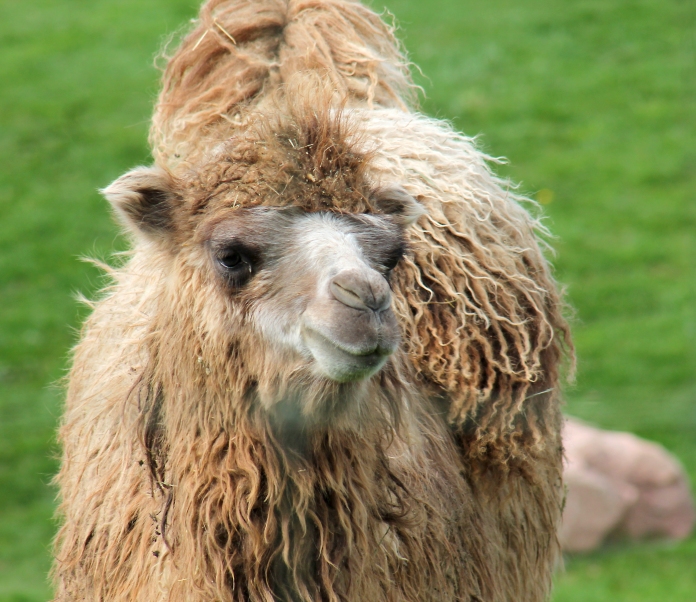 …before heading up the hill to hang with his “sisters” for a while. 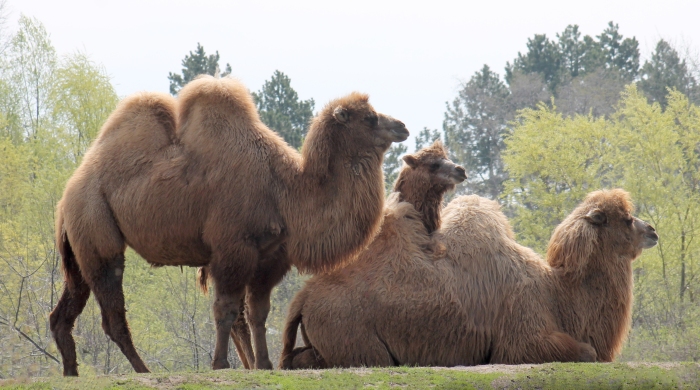 I didn’t see him again for quite a while, mostly due to the Zoo being closed for five weeks from early May to mid-June. When I did get back there I was stunned by this sight: 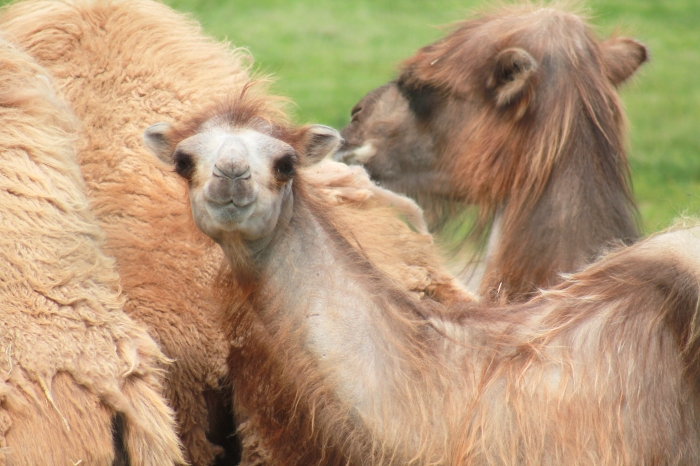 Where’s the rest of Jamarcus??!

My goodness! Jamarcus had gone through such a shed it looked like he had been struck with alopecia or something! Quite a shock to the eyes.

Now he is nearing his first birthday and has grown to a healthy size (although he has a lot farther to go), but he clearly hasn’t lost an ounce of that curiosity or boyish impishness: 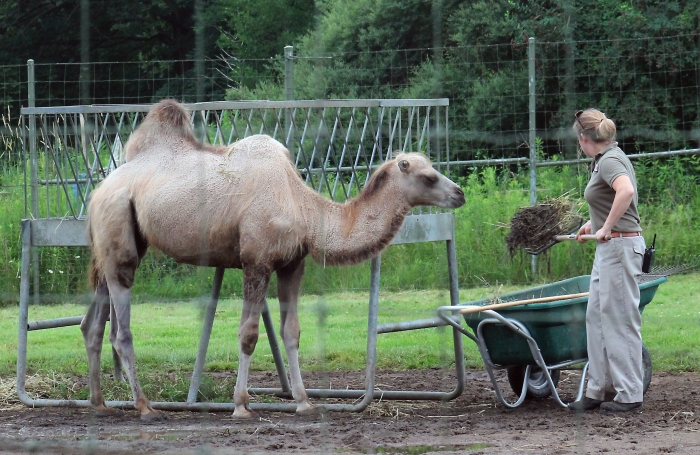 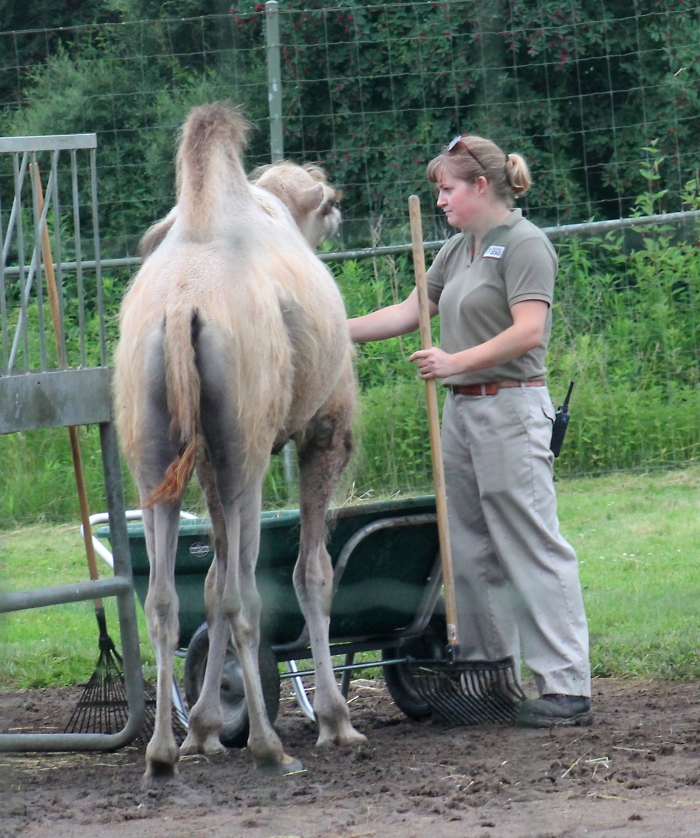 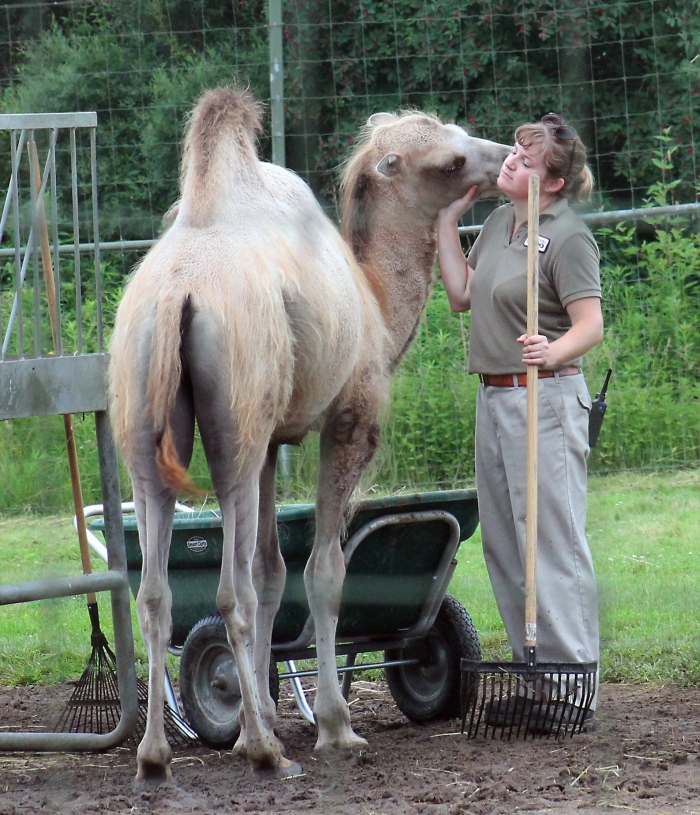 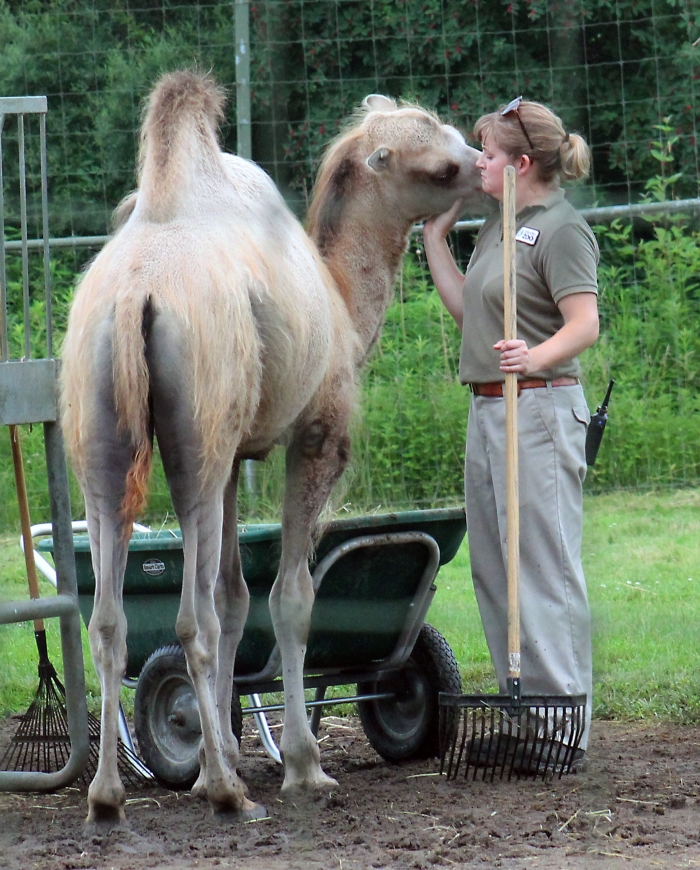 Next month is a very special “Baby Boom”: four of the most adorable little boys you have ever seen in your life. I’m very much looking forward to writing about them! See you then!

Oh, that’s right. I owe you a story. Ok, here goes: when my group of Volunteers went behind-the-scenes in February one of the very first things Jennifer told us was about another Volunteer who had come through with a group (although it was unclear if he was leading a tour or had come with a different BTS group) who had come upon Jennifer cleaning up the paddocks around the barn and blurted out something about Keepers “spending all day cleaning up poop”. Absolutely disgraceful – and all of us there that day gasped in shock at the insensitivity and ignorance behind that event. She appealed to us to please, please not do that when we lead tours – although she definitely handled the affront brilliantly when it happened, it seems. We expressed our solidarity and apologized for our fellow Volunteer.

A little later on in the talk, Jennifer was telling us about the camel program over the years at the Zoo. She mentioned it the numbers were dwindling and she was concerned that there might be consideration given to phasing it out down the line. She mentioned that there had once been a huge number of bactrian camels at the Zoo and, in fact, there had been 30 when she had begun working with them. After a while she asked if we had any questions, so of course I immediately raised my hand. When she noticed it was me, she kind of sighed a little and said, “Yes, Steve?” in a bit of a sing-songy voice, obviously reading ahead a little bit.

I asked her, “Did you say there were 30 camels when you began, Jennifer?” She warily confirmed that this was, indeed, true. “Wow,” I continued. “That must have been an awful lot of poop to clean up, right?” Jennifer laughed and put her hand up to her face, shaking her head from side to side. Almost at once, the other Volunteers groaned and one of them smacked me on the shoulder. “We almost made it!” she said to me.

“Almost made it??!” I chortled. “Have you met me? There was no way we were going to get out of here without me asking a question about poop. In fact, I’m a little ashamed it took me so long to ask it, to be honest!”

And yet, I still got to see the barn and pat Jamarcus after that. I guess it pays to know your audience.