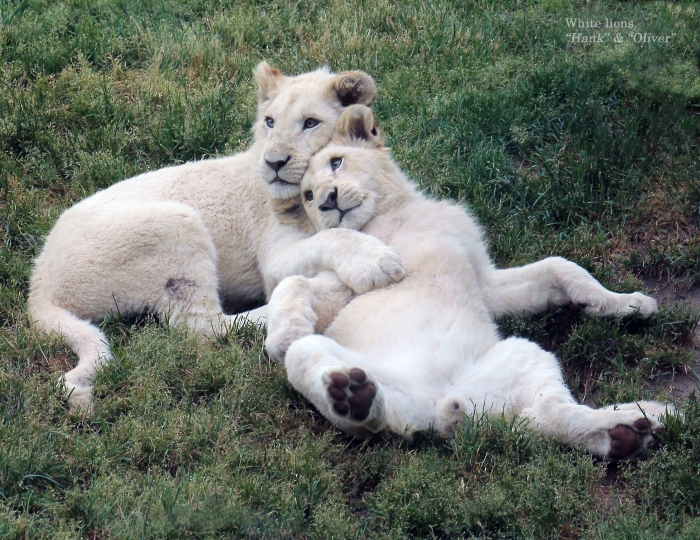 Two of the four adorable cubs in the litter 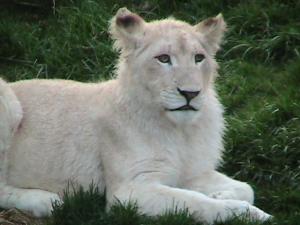 In early 2012 three white lion cubs arrived at the Toronto Zoo from South Africa. Near the end of April, two of them – a boy and a girl, with one girl still in quarantine – made their debuts over two nights of Member Previews. Sarah and I went the first night, which ended abruptly with us running full-out to our car before a huge storm hit. The next night, our friend (though a stranger still at that time) Sue Maynard went and took the photo at left. (If you click on the picture it will take you to her awesome blog!) I’ve dug into it as much as I can and I can’t find out which of the girls was on exhibit those nights (they didn’t received their official names, Makali and Lemon, until August of that year), but obviously we saw Fintan for sure, meaning we met at least one of the parents of 2015’s stunning litter of boys when they were not much older than Hank and Oliver in the photo at the top of this page. In those early days they were rotated on the main exhibit with the two older tawny boys, Jerroh and Lyndy, and it wasn’t always a certainty which pride one would be able to see on a visit to the Toronto Zoo for a couple of years. Then, in September of 2015, it suddenly became a lot clearer who the draw was going to be for the foreseeable future. 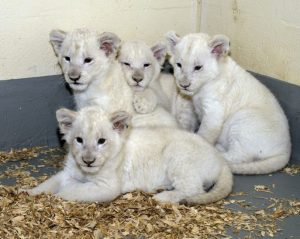 Born overnight on the 26th and 27th of September, 2015 to Makali and Fintan were four white lion cubs – all boys, as it turned out later to some dismay. I don’t recall if I knew Makali was pregnant in the first place; truthfully, once I found out Ashakiran had a baby coming I didn’t really pay a lot of attention to any other pregnancies. I do know we were all quite excited once we did find out, a few days after the birth. We had to live vicariously through the Savanna Keepers and the photographers who got to spend time with the tiny lads until December, when the Zoo realized they would not be able to keep everyone away from the babies until the Spring. Modifications were made to the lion house – fencing, roofing, heating units – which would eventually allow the public to go “behind-the-scenes” (a rather surprising move to most of us) and see the cubs growing through the cold days of winter until the temperatures warmed up sufficiently (and they were big enough) to allow the whole family to come out on the main exhibit.

I’ve always thought this was Oliver…

While they were in the small yard outside the lion house, I visited them nearly as often as I could possibly do so – including one early day when I hung out around the main exhibit for a long time until I was finally brought down with Staffers to see them outside. (I just assumed they took pity on me as it was quite cold that day!) It was amazing to watch them cavort with each other and their amazing Mom, but photos were not easy to grab. Temporary ropes kept us a fair distance from the fencing – but close to quite reflective plexiglass between us and that fencing – and the cubs were simply never far enough away on the other side to get a clear shot through the gridwork. Not, of course, that that ever stopped me from trying! 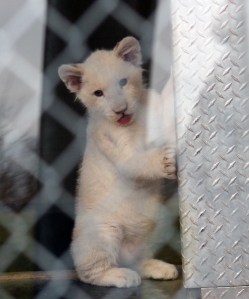 Just happy to be alive!

At first, in mid-December, they were accessible every day for a couple of hours around the time of the Keeper Talk. Once the hubub died down a bit and the Holiday Season had come and gone, they were visible to the public only on weekends, until the time came for them to finally hit the Big Time of the main exhibit. That happened on March 9th, which was a Wednesday; I didn’t know what day they would make their first appearance that week so I came in on Monday morning just in case, which didn’t yield any cubs but did result in a lifelong love affair between Kanzi and me, which I covered in my blog post of March for the “Adult” calendar. And then in early May, when the whole family was only visible behind-the-scenes again for a couple of days while repairs were being done to the water bowl in the big area, I led a tour to see the cubs and ran into one of the Keepers who asked me if I had heard anything about “a lynx kitten” being born in the past few days? And I talked about that in my April “Baby Boom!” blog piece. So quite aside from being the most adorable male quartet this side of a barbershop, these boys have had a small hand…erm, “paw”, in quite a few other wonderful memories I have of the first eight months of 2016 – including an unforgettable “Keeper for a Day” experience which I also discuss at great length in the post about Kanzi to which I linked earlier in this paragraph. 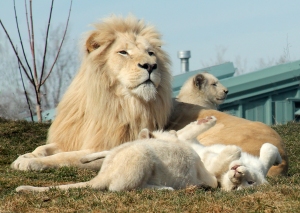 This photo is all about that face at the bottom right ❤

So through the rest of 2016 I tried to get up to see the family as often as I could. For one thing, I found myself visiting the lynx babies several times a week and if I was going to be heading to the Canadian Domain anyway, well….the lions really weren’t that far off my path. Not that anyone should ever have needed an excuse to spend a few hou–er, “moments” with this incessant jumble of arms and legs, pink toes and pink tongues, fluff and nonsense. Fintan was, for the most part, an incredibly patient Dad – and never more so than when he allowed the aptly-named “Hank” to rip huge…well, “hanks” of hair out of his regal mane with nary a complaint. And they sure loved him to pieces, let me tell you. Literally, I guess! 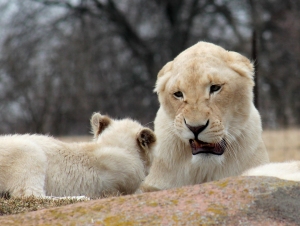 Auntie Lemon laying down the law

Makali was a great Mom when the cubs were in their early days of exploration, always keeping a close eye on them but still allowing them to learn things on their own. Once they got out on exhibit, however, somehow the caretaking job seemed to subtly shift to Auntie Lemon. Believe me, she was up to the task. She was obviously extremely fond of her young “nephews” and, for the most part, let them roughhouse and pester her at will. But every now and then… that powder keg would light and any observer could see what was coming just over that hill. Except the cubs, of course. And that would occasionally lead to scenes such as the one playing out in the photo here, above. There is no doubt in my mind this is Oliver, stepping on or over or around or just near Lemon one time too many. She never smacked them or anything, but with this facial expression would she really need to take it any further? *shiver*

Ah yes, Oliver. First known as “Little Spot” in recognition of that very thing – a fleck in one of his eyes – he was clearly the most adventurous of this little gang. In any early shot of them for publicity purposes (including the one I used in the second paragraph, above) there was always one cub that just didn’t quite share the mood or body position of the rest of the group. This was pretty much guaranteed to be “Little Spot”, so of course he was my instant favourite. During that Keeper for a Day experience I mentioned earlier there came a time late in the afternoon where I was sitting near the fence of the lion house with the cubs lounging close by on the other side. When they (and the adults) heard one of the Keepers begin to set up the dinners for the late shift inside the house, the seven of them began to get up, one by one, and leave me and the other Keeper to go see about that noise. All of them did this, except for one. That one watched them go, but simply was too interested in this new face and voice so close to him that he refused to walk away from me. Obviously, that was Hank. No! Ha! It was Oliver. If I hadn’t loved him already that would have done it right there. By the way, I’ve just realized I’ve only mentioned the names of two of the cubs: Hank and Oliver. To round out the foursome, here are the other two names: Harrison and Gus. 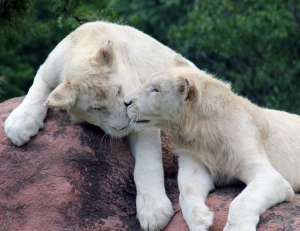 As the boys grew older and moved into their second year, decisions needed to be made for their future. The tawny brothers, Lyndy and Jerroh, with whom they shared the exhibit lived their whole lives at the Toronto Zoo, staying with their folks (Rowdy and Nokanda) after being neutered. I don’t know if this option was ever discussed to any degree as a choice for the four white cubs; in any event, they remained “intact” and, therefore, would eventually have to be moved elsewhere. And so the news came out late in 2016 that they would be heading down the Trans-Canada Highway to Parc Safari in Quebec early in the new year. After a tearful and heartbreaking last feeding from two of my favourite Keepers, they left in February of 2017, along with the lynx kittens and their Mom, Ember. (I also spoke about this in that April “Baby Boom!” post, linked above.) With all seven of them going to the same place – and with me wanting to visit relatives in Montreal also – I went to visit them there in June of this year. 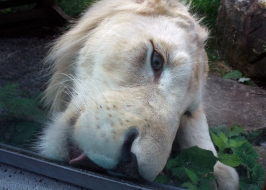 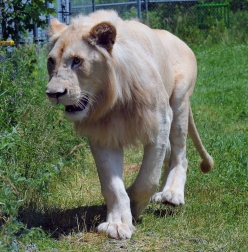 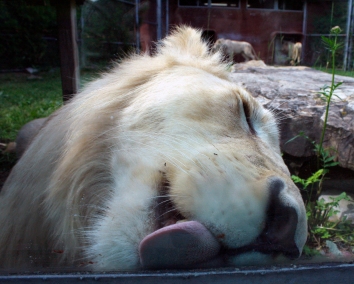 It’s an awesome place, that Parc Safari, and they seem incredibly happy to be there. I hope to get back to see them again very soon – perhaps even later this year.

As for the adults they left behind? 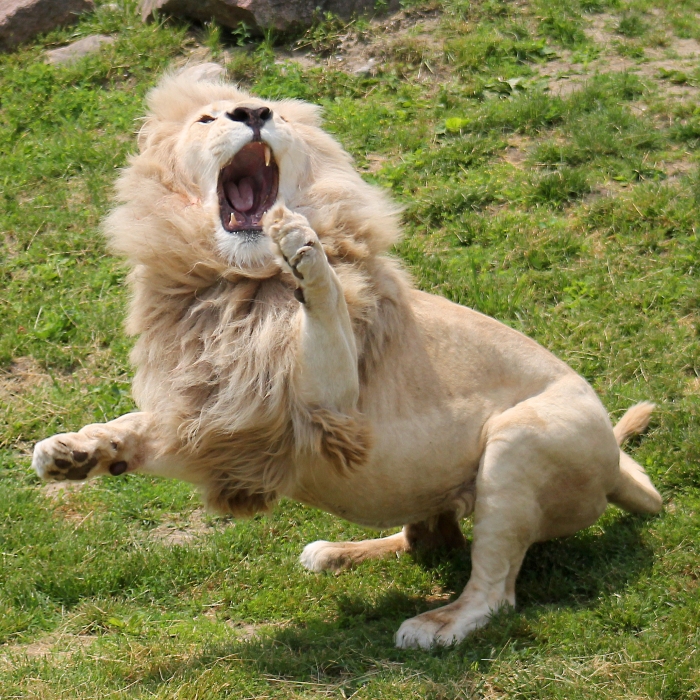 Next month: black-and-white superstars. Bet you can’t guess who I mean! See you then!