Handsome lad – and look at that tail!!

Well, the gorgeous animal I chose for this month was one of the Zoo’s clouded leopard pair: Mingma, the male. His partner’s name is Pavarti, although there seems to still be some debate as to the proper spelling of each of those names (Ming-Ma; Pivarti). Nonetheless, I digress: my point here is to warn you ahead of time that I might not spend nearly as much time talking about – and showing you photos of – the “animal of honour” this time around as I usually do, because….well, hang in there and you will see.

The two young cats were born at the Nashville Zoo in 2013 – Mingma in February and Pavarti in April – and arrived in Toronto as a “breeding pair” in the late Winter or early Spring of 2014. They took quite a while to get used to their new digs – and, oddly, to each other even though it was thought they were already bonded when they arrived. Just before the public finally got to see them in September, 2014 they spent a few days together in the exhibit, but with the windows boarded up. This way they could get used to the sounds and smells of the people passing nearby without the additional stress of seeing them. When the boards finally came down – one at a time, not all at once – we were treated to the sight of two beautiful young clouded leopards who seemed very interested in the folks who were on the other side of the glass (in Mingma’s case, particularly the very little folks). Pavarti was very vocal for a few weeks; I enjoyed in particular when she would get up high in one of the branches near the top of the window, look out through the heavy screen there, and mew to me, softly.

My only real experience to that point with clouded leopards had been sweet Merriwether who had passed away the previous year, but had spent much of her later life in a hammock near the back of the dark exhibit and was very difficult to see well. After she died, one of the female red pandas – Maki – was moved into the exhibit temporarily for a couple of reasons: 1) the Zoo received a new male red panda (Ralphie) and wanted to try to breed him with the other female (Cassie); and 2) Eurasia was still closed to the public so this gave visitors a chance to actually see a red panda and compare it to the giant pandas which had just gone on display a few months earlier. Obviously, a red panda does not belong in an exhibit in the Malayan Woods Pavilion, so it wasn’t long before Maki moved on to her final home: Safari Niagara. This gave the new cloudies a chance to explore the exhibit as soon as they were released from quarantine.

Pavarti in a favourite perch

But the two new additions did not exactly get along famously for quite a while. They were not always together, but when they were Pavarti seemed to be intimidated by Mingma and spent an awful lot of her timing tucked into a tiny space up high above the screen where not only would she be inaccessible to her erstwhile partner, but out of sight of the viewing public as well (although you could sometimes just make out her whiskers and ears if you peered long and hard enough through the heavy mesh). Eventually this area was filled in and the two young cats spent less time together in direct contact, although there was virtually always the opportunity for them to see, hear, and smell each other through the screened door separating the main exhibit with the back area that also led to the outside run. So we could often see both of them at the same time, albeit not actually in the same enclosure. But I guess they weren’t always separated, because in May of this year…. 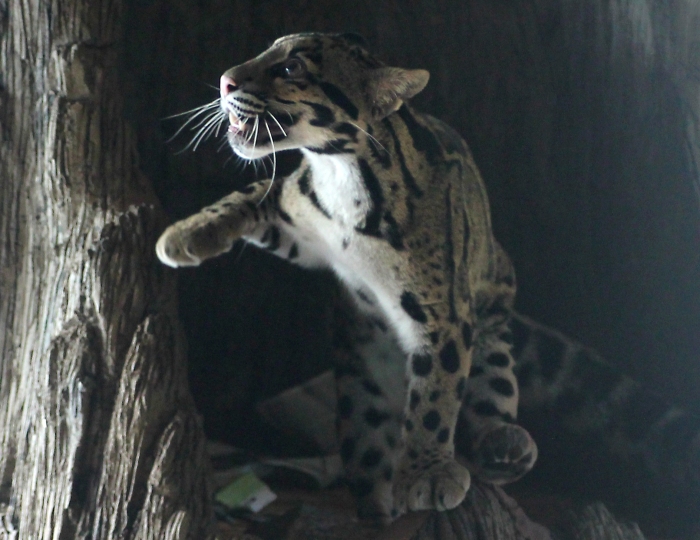 As-yet-unnamed sisters (Levy and Charlotte are their nicknames)

And so this is why I wanted to give you the head’s up earlier, because it’s likely the rest of this post will focus mainly on these two girls because, well, look at them, that’s why. 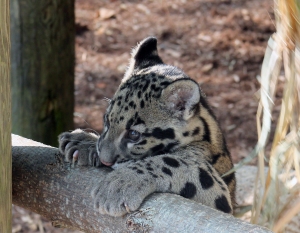 Seriously, I can barely take it

On May 13, 2017 – just a few days after the Keepers went on strike – Pavarti gave birth to two beautiful little kittens. This was the second of three eagerly anticipated litters of kittens – sandwiched between five cheetahs and three snow leopards –  and was a spot of bright news for the folks walking the line. But things very quickly went sour as Pavarti, apparently doting when they were first born, began to ignore the cubs. At least that’s the best I can make of the story; there might be more to it and I will be happy to make adjustments to this post if anyone reaches out to me, but for whatever reason, the kittens were left to their own devices and rapidly deteriorated. This led to them being rushed to the Health Centre on their second day on earth and an absolutely astounding turn of events.

The cubs in the health unit

At some point on the evening they were brought to the Health Centre, the cell phone belonging to one of the Vet Techs on strike rang. This particular Tech, Dawn, literally wrote the book on the protocol for bottle-feeding and hand-rearing at-risk babies who had been removed from their mothers. The non-union staff inside the Zoo realized how critical the situation was and, after reviewing all their options, decided the best course of action was to reach out to Dawn to see if she would be allowed to cross the lines to save the lives of these tiny newborns. She got the necessary permission and entered the Zoo, working for about eight hours through the night to stabilize the two sisters, before returning to her picketing duties. This is, quite honestly, one of the greatest stories I have ever heard having to do with a workplace stoppage. The PR bonanza that should have come with this story would have been incredible: just imagine the Zoo posting on their FB site to all of the people who were so concerned for the safety of the animals that, when the chips were down, they put aside their differences, reached out to one of the strikers, and saved the lives of the first-ever clouded leopard babies born at the Toronto Zoo, in an amazing display of non-partisanship.

Except the Zoo didn’t post that story. They completely dropped the ball, choosing to instead gloss over the entire event when they did announce the births a few days later. And when it became known to anyone who knew anyone at the Zoo exactly what had happened, they went on to lie about it once the strike was over, with their PR spokesperson, Jennifer Tracey, saying on television that it was Dawn who reached out to them (really, how would she have known?), that the Zoo “graciously” (as Tracey put it) “allowed” her to come in and help, and that she left after “a couple of hours.” Now, as you can probably imagine I have a lot more to say about this whole thing, but there’s a time and there’s a place….and that’s not now and not here. At the end of the day, the cubs were saved and are now absolutely thriving.

The kittens and friends

When it was time for the kittens to make their public debut, the former lion-tailed macaque house had been repurposed for their new exhibit (the macaques moving to a new home on the Eurasia drive-through, the former digs of the Barbary apes – who are not actually apes…but that’s a story for another time). This has proven to be an excellent place to observe their antics, with a lot more natural light than their parents’ exhibit in the Malayan Woods Pavilion and a bonus area beyond the roof where the sun can shine directly on them. For the first few weeks, the cubs came out twice a day – from 11:30-12:30 and from 2:30-3:30 – and were very labour-intensive, requiring the constant observation (inside the enclosure) of normally two Keepers for the whole hour they were out. This definitely helped their growth process, as the Keepers were constantly playing with them, getting them to run around and jump from log to log, helping them sort out their balance and get their legs working beneath them. However, at the end of the day they’re still kittens, so the Keepers had to spend a not inconsiderable amount of time trying to train them not to jump on them or climb them. This was met with varying amounts of success: 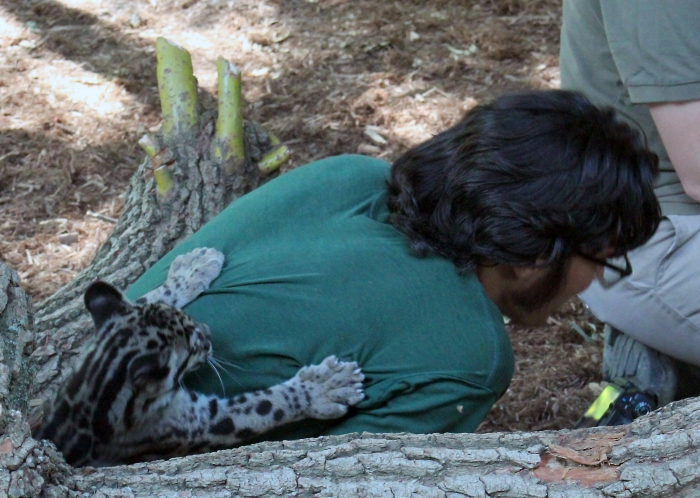 Of course, it’s not all claws and fangs. There are obviously some huge perks. 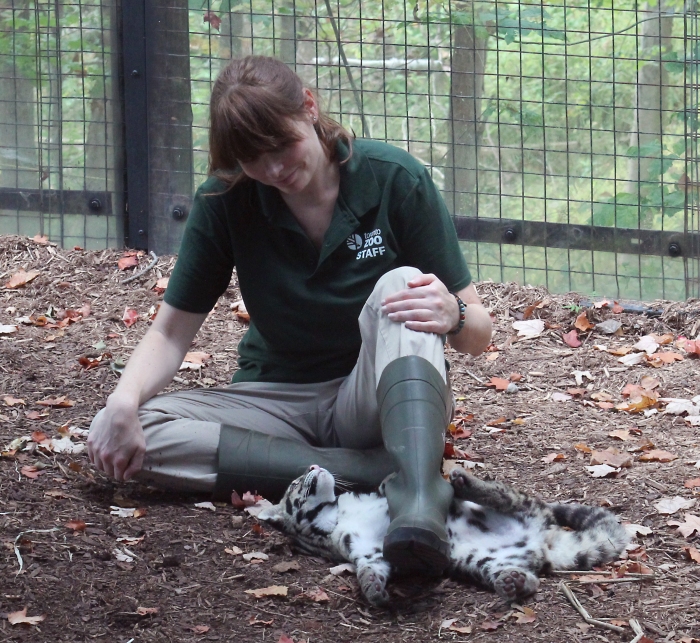 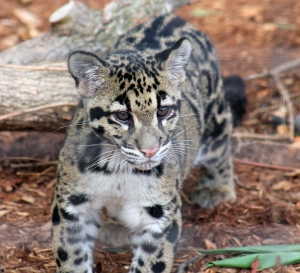 Out in the sun

As time has moved along and the cloudies have become bigger, stronger, and more confident, they have been left with access to the exhibit on their own between 12:30 and 2:30. The first time I saw them out on their own I of course couldn’t resist trying to get their attention through the mesh of the fence at the south end of the exhibit. It worked like a charm as the more inquisitive and confident of the sisters (Levy) immediately flattened herself down to the ground and began to “stalk” me from near the windows. She slowly began to creep toward me, popping in and out of the logs and branches along the way. It was absolutely adorable and I will definitely keep trying to interact with them until they inevitably outgrow the games.

So to sum up: congratulations, Papa Mingma (and Mama Pavarti). You sure cooked up some gorgeous little kittens. Go ahead and rest up for your next attempt. 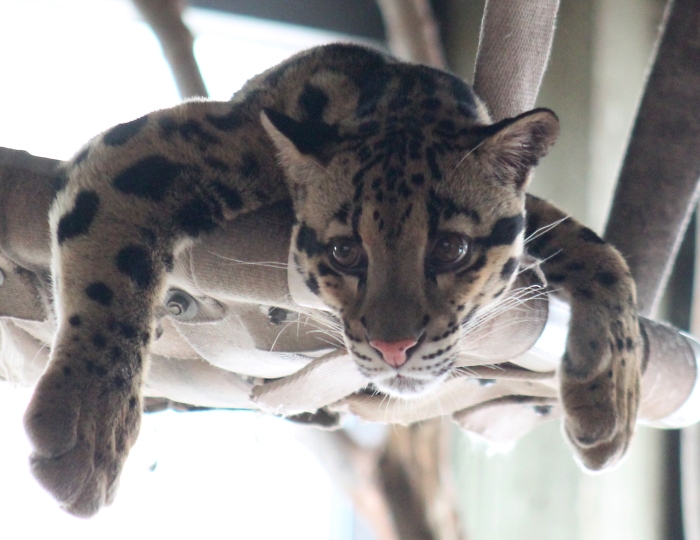 Thanks for joining me once again. One more month to go in 2017! For December: another animal that happens to be a favourite photo subject of mine, but one which very few people seem to actually pay any attention to. See you then!