This is the very first photo I’ve ever featured in one of my calendars that was not shot at the Toronto Zoo. There will be more to come throughout this year for each of the two calendars: “Adult” and “Baby.” I wanted to start with something really special to get off on the right foot; I believe I have chosen well because one of my customers this year – a very gifted photographer in his own right – purchased the GRUMPY PENGUIN calendar and immediately turned to the February photo to demonstrate exactly why he had bought one. A very flattering experience! So, without further ado, let me bring to you a (very) brief story of Monkey World in the UK. 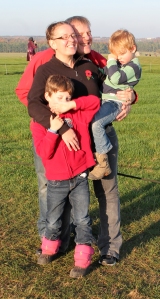 This is the Cheesman family. Even though Sarah and I have only been in the same room with all four of them on a number of days that I can count on my fingers, we love them dearly. Not dearly enough, apparently, to have more than one photo of the family altogether, so I’m going to have to go with this one where they appear to be staring into the very mouth of Hell. Anyhow. We met in November of 2014 when they were in Canada to attend the wedding of a friend of theirs, who just happened to be marrying a friend of ours. We shared lodgings with them the weekend before the wedding and we hit it off so incredibly well that: 1) they came to the Toronto Zoo to have a “private tour” from Sarah and me; and B) they insisted we spend some time with them the next fall when there would be a repeat wedding performance for friends and family who had been unable to cross the pond for the first one. Of course we accepted – I’m smarter than I look! – and we flew over in late October, 2015 to spend six lovely days with this amazing family. 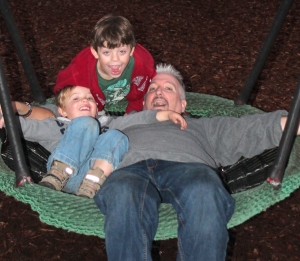 3 escapees from the sanctuary

While they were in Canada, the Cheesmans – most notably the two young lads – could not stop talking about this amazing place they had just visited called “Monkey World.” It is a marvelous rescue and rehabilitation centre for primates located in Dorset in the south of England. It opened in 1987 as the loving project of an incredible man – Jim Cronin MBE – who sadly passed away only 20 years later and is still much missed. It spawned a very popular TV show called Monkey Life and is well known around the globe. The Cheesmans insisted we would have to go there with them in 2015 when we visited. That sounded like a terrific idea to me, so I asked them what sort of monkeys they had there. This led to a rather awkward conversation, as I had been well-drilled on the difference between monkeys and apes. “They have chimps and gibbons,” I was informed. Hmmm. “And orangutans! Even baby orangutans!” Huh. “Cliff,” I protested to the Dad, “those aren’t monkeys. They are apes. They have no tails.” “Oh, don’t worry,” he said. “They also have capuchins, marmosets, spider monkeys, etc.” I grumbled a bit about this as the concept of labeling them all “monkeys” made me downright itchy. Cliff clearly noticed and filed this away for later. 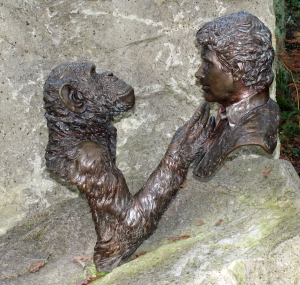 For the next year, whenever we talked about visiting the sanctuary, it was always referred to as “Monkey World.” Each time I bristled a little bit and Cliff generally said, “Yeah, sorry, I know there are apes there too!” It appears that he had my number right from Day One and knew exactly what button to push. When the big day came and we pulled into the parking lot of the park, I read the big sign over the entrance:  Monkey World – Ape Rescue Centre. “Hey, uh, Cliff?” “Yeah?” “You know it says ‘Ape Rescue Centre’ as part of its name?” “Oh, sure!” “Then why didn’t you tell me before?” “It was too much fun not to!” (At least that’s the way I remember it – I’ve likely paraphrased quite a bit.) Well, I certainly had it coming, so hearty chuckles were had all around. I’m still plotting my revenge. Don’t tell Cliff. 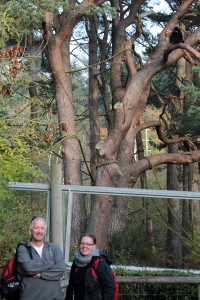 We arrived at the sanctuary right around opening time and stayed until it closed. As was the case with the majority of our UK tour, the weather was incredible – especially for November. The website for the park says they are home to over 250 rescued and endangered primates; we certainly saw the vast majority of them in our time there. The golden-cheeked gibbons were actually the first primates we encountered – though not Kim and Tien immediately. In going through my photos chronologically and comparing them to the website and the map, it appears we came upon Teo and Zak just after entering. In all, there are five different species of gibbons at MW-ARC; I encourage you to check out the website for the complete stories of all of them and to learn everything I do not cover in this post. Next up was one of the groups of orangutans – I suspect it was Tuan’s group – before we got to the first of the four social groups of chimpanzees, these ones visible from the Treetops Cafe. 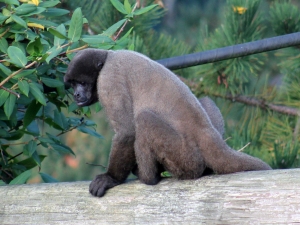 From here on in it won’t be possible for me to label each individual group of chimps because I can’t be 100% sure what direction we proceeded in on the map. Furthermore, I am loath to add any photos of them to this post because one of the chimps appears in my ANOTHER BABY BOOM! calendar and I don’t want to use up all the visual bonuses from that day. In any event, we grabbed some nosh and sat at the cafe for a while, fascinated by the chimps in the group we could see. When we were done, we moved on deeper into the park, past the wooly monkeys (seen here), capuchins, marmosets, more chimps and orangutans, the gibbons (Kim and Tien) who made the cut for this month, ultimately arriving at the ring-tailed lemur exhibit just in time for a Keeper Talk. 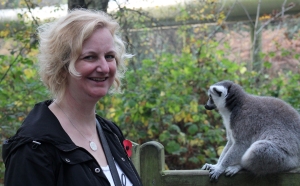 Sarah and her prosimian buddy

That ring-tailed lemur exhibit was an amazing revelation to us. It was an enclosure into which the public could walk and meander among the free-ranging ring-tailed lemurs. It was rather a large area, with exactly one (1) staffer or volunteer inside to gently keep a watch on things and a few signs reminding visitors to please not touch the lemurs. And you know what? Nobody did. It’s incredible how well a non-litigious society can work when people take enough personal responsibility so they don’t need to be treated as toddlers! In fact, we went to three animal parks in the UK in total – Monkey World, ZSL London Zoo, and Edinburgh Zoo – and all three of them had a lemur walk-through with free-roaming lemurs! A wonderful experience, to be sure. 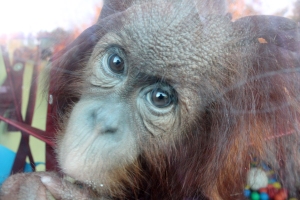 From there we walked past the orangutan nursery where a couple of tiny adorable souls were hanging out. This, obviously, took a while to tear ourselves away from. Eventually we did, and dropped in on the squirrel monkeys briefly before heading for the deepest part of the sanctuary. We opted to take the “Woodland Walk” which swings far around the lemur walkthrough and works its way through the forest at the edge of the park. It was very quiet in there, fresh and sweet-smelling. It was quite lovely to spend a few minutes just sauntering through some of England’s pastoral landscape and I think I’d have walked the path even more slowly had it not been getting so late in the day. 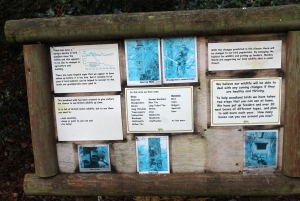 Signage on the nature walk

The signage could use a wee refresh, but that’s ok with me; I would imagine they have more pressing needs for their money in taking care of so many rescued animals. We heard quite a few different kinds of birds but didn’t see too many – again, perhaps with more time. We did see a robin, though, which was exciting (so very different from the robins we see around Canada), and were standing still trying to pinpoint another bird’s call when we suddenly heard a loud rustling from the bushes just up the hill from the path. Before we could even begin to imagine what kind of creature(s) might be heading our way, out of the forest crashed a couple of roe deer on a bit of a romp. They were every bit as surprised to see us there as we were them; they quickly changed direction and exploded out of sight before I could even put my hands on my camera. A wholly unexpected and completely thrilling moment! 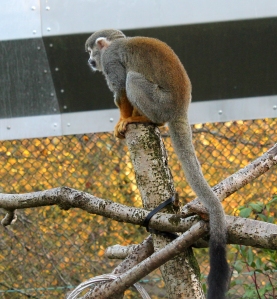 We reached the “Great Ape Play Area” which was huge and spectacular, but didn’t spend a lot of time playing there with the kids as we could see the sun starting to fade. In that area of the world, the sun sets a little earlier than it does here, and once it makes up its mind to do so, it wastes no time at all. It’s light….then it’s dark. Bam. So we knew we wanted to get back to the entrance and the gift shop before everything shut down for the day, but also before we were wandering blindly through a pitch-black forest. This didn’t allow us nearly enough time to spend with the capuchins, spider monkeys, and stump-tailed macaques, so it appears we will simply have to return on our next visit to our Basingstoke friends and simply head to the back of the park and work our way forward instead. With any luck, we won’t have to wait too long for our opportunity.

I’ve barely scratched the surface of this amazing place. I will try to add some more detailed information in October when I make my post about the chimp featured that month in my “Baby” calendar. In the meantime, please do check out their site and see if you’d like to help them in any way. For example, for Christmas of 2015, the Cheesmans adopted an orangutan in our name and we were so thrilled that they did that.  Even just reading up on these endangered animals and learning the reasons why they needed to be rescued is a huge step. Enlightenment = empathy and that is never a bad thing.

Next month: a goofy boy who is a favourite in two nations and who introduced me to a great many wonderful online friends a few years back. Thanks for reading; hope to see you then!