A peachick next to her mom, during that “awkward teenage phase”

In February I featured and wrote about a free-roaming baby bird at the Toronto Zoo. That was a Canada gosling, not an animal that is part of the Zoo’s actual “collection.” However, there is a species of bird that wanders the Zoo grounds from spring to fall when they are rounded up (not without a struggle) and housed indoors for the winter that does belong to the Zoo’s collection: peacocks. I look forward to their return every year for they are every bit as much a harbinger of warmer times as the first pitch of the MLB season, or the first robin, or the first day you go to work and return in daylight. A few years ago there was an outbreak of avian flu in Ontario and the Zoo was quite careful with which birds they put out that summer, and when. Because the peacocks aren’t protected in any way by exhibit walls or buildings, they were kept off display that entire year and they were sorely missed. The Zoo simply was not the same without them; it felt, in a way, as if summer never truly arrived that year. The next spring I was walking the grounds with a fellow Program Director and we saw a peacock in a courtyard of the African Rainforest Pavilion. It was a glorious sight and we were thrilled to have them back. However, it wasn’t until a few days later when I was entering the Zoo for a shift when I realized it wasn’t just the sight of them I missed. I heard one of their distinctive, rhythmic, loud calls from somewhere within the Zoo and suddenly everything seemed right again. I really believe I miss that sound more than I miss seeing the actual birds when they are off display.

A wary Mom and her twins

There is a lot of posture by the boys during breeding season – so one might assume there is a lot of mating – but it is rare to catch sight of any chicks. I don’t know if this means that there is a lot of predation of eggs, or the eggs are oiled (to prevent gestation) when discovered by Zoo Staff, or if there is a lack of viability within this community, or if the peahens simply do a really good job of keeping their offspring hidden as much as possible. Whatever the reason, I am always quite thrilled to see a baby or two (or more) in tow behind a proud but wary Mom in the early summer days, and I always try to capture the moment if I can. The biggest issue I face is Mom is constantly keeping the chicks on the move (and often in her shadow, as you can in the photo here) and the babies are so tiny it’s very hard to keep them in focus for long enough to grab a decent photo. The chick I photographed for this month’s featured animal was considerably farther along in months than the wee balls of golden fluff I ordinarily see, so it wanders off a ways from its Mom and was much more deliberate in its actions (and substantially bigger) so I was able to take quite a few excellent shots. I was fascinated with the nascent crown blooming on the peachick’s head, along with the first sproutings of tail feathers. I couldn’t tell even at that stage whether the baby was male or female; I suspect female because the tail feathers looked to me like they were not going to be long, but I honestly don’t know exactly what stage of development I caught the chick in so it’s really just guesswork on my part. 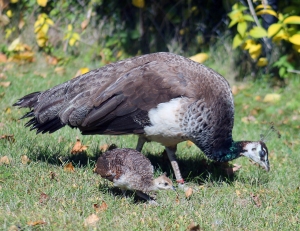 Learning how to “graze”

Here is a looser shot of the chick and its Mom. Even with the obvious signs of maturation, the baby still clearly has a long way to go at this stage. Nonetheless, I adore those tiny hints of a new crest atop its head and I think they form my favourite part of this fledgling. I also am very fond of shots where you can see all of the baby but only enough of the parent to get just a sense of the size difference, which is why I chose the shot I ultimately used and not, for example, the one here at left. But the perspective to be gained from this shot is not to be sneered at, either. The difference between them is truly remarkable, for I believe it’s “normal” for chicks to gain size at a startlingly rapid rate after they have hatched, and that does not appear to be true for peafowl if these photos are any indication. 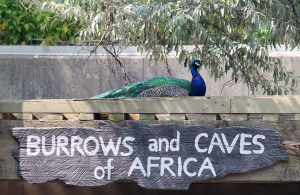 Don’t believe everything you read

When I led tours at the Zoo, I enjoyed catching sight of a peacock (usually, but sometimes a peahen) on the roof of a building such as the African Rainforest Pavilion (seen here) or at the back of the Indomalayan Pavilion. I would then turn to the students in my charge – who most often had not noticed the bird – and ask them if they thought peacocks could fly. This was especially fun if they had already seen peafowl wandering around the Zoo; it was the most fun if there were peafowl on the ground within eyesight at that very moment. Almost invariably the consensus was no, they could not fly. Presumably, they simply looked too ungainly to be able to lift off of the ground and besides, nobody had ever seen them in the trees, so why would I ask such a silly question? I would then take immense pleasure in pointing out the splendid plumage on the creature just over their heads and ask them if they thought that particular peafowl had reached that lofty point by using the stairs, or if they climbed up the outside of the building like Spiderman? This never failed to elicit a lot of “ooohs” and “wows” from the group, and I would then go on to explain that they could indeed fly, if only for short distances at a time. Wikipedia mentions that “(p)eafowl are forest birds that nest on the ground, but roost in trees;” it’s particularly exciting (for me) when I can spot a peacock and a peahen “chatting” with each other from high up in adjacent trees at the top of the long hill leading down from the African biome to Indomalaya at the Zoo. It’s a fairly rare sighting and always seems at least slightly fraught with danger! 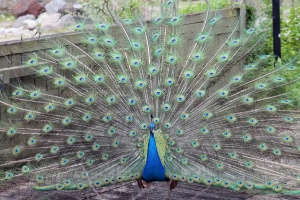 That same Wikipedia article has a very interesting discussion about the varying reasons for a peahen to select a specific peacock. Globally, it does not seem to be as cut-and-dried as most people think it would be; that is to say, the males’ feathers do not seem to be the sole indicator for breeding choice, and it may well differ as ecological conditions change. There have been several studies undertaken to attempt to determine the reasons for selection; their results have varied and often been contradictory of each other and, at the end of the day, I’ve not been able to uncover a definitive answer in any corner of the internet. If I am overlooking anything that you are aware of, please do let me know. In the meantime, there is one species of animal for whom the beautiful feathers very much are an almost irresistible attraction: 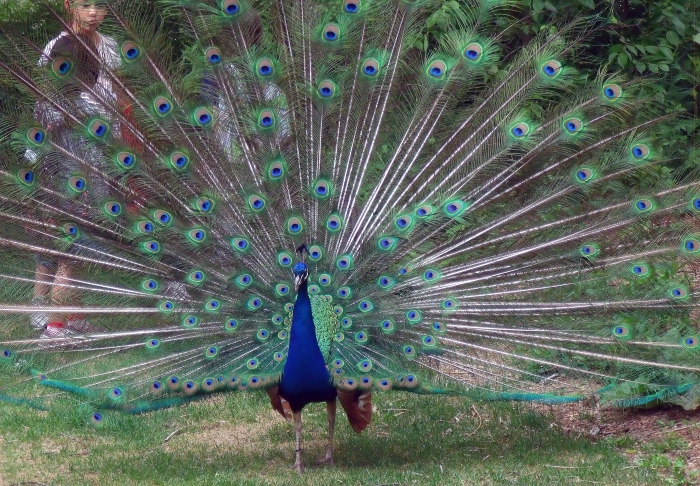 Humans. I am honestly not sure how much longer the Toronto Zoo will be able to safely allow their peafowl to roam the grounds freely, as the current culture of “entitlement” and erosion of basic good manners has led to a very sharp rise in the number of humans – and not all of them children, not by a long shot – chasing peacocks around the Zoo, attempting to snatch a feather from their beautiful arrays as some kind of a “souvenir”. This, as you might imagine (and if not, then why not?), absolutely revolts me and it’s become so flagrant and consistent that crossing paths with a meandering peacock can now add several minutes to my walking time between Zoo exhibits, as I always hang around for a little while to see if anyone is making an obvious beeline for these lovely birds. When anyone chases a Canada goose, it also angers me; however, I usually don’t step in in those cases, because the geese can become quite irate and one pinch from a goose’s strong beak will usually put an end to that kind of behaviour for a lifetime. Peacocks, however, seem immeasurably less interested in defending themselves and will most often just keep on running away from their tormentors until they reach some sort of safety, the disgusting humanoid grabs its prize, or common sense (in the form of myself or another equally enraged “citizen”) shouts out a command to stop that behaviour.

All of this, of course, is entirely moot should that gray-matter-deficient homo sapiens representative happen to be holding easily-reachable food. Then the odds are, at worst, even – and may well favour the peacock. In these instances, hilarity quite often ensues. I just wish it was more often, that’s all. Please, I ask of you: if you are witness to any of these idiots chasing any animals around a park or a Zoo or what have you, step in and shame them. Believe me, they deserve it!

Ok, that escalated quickly. Sorry. Here’s one more shot of a fluffly little peachick to reset the mood: 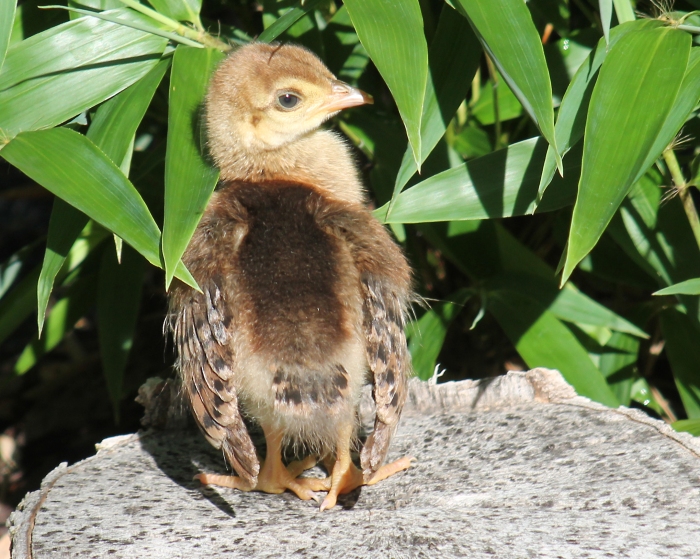 Oh my goodness. I just checked to see what next month’s photo is and my heart nearly exploded. I hope you can wait the 30 days for that post, because the photos I will include? Good grief. Hang in there and, as always, thanks so much for dropping by!