If you are any kind of a regular reader of my blog posts or follower of my Facebook feed, I won’t have to point out to you that rhinos have zoomed up to the very top couple of favourite animals on my list (penguins are still holding their own, after all these years). A couple of years ago, I posted a piece on my other blog on the subject of Ashakiran and how much she means to me – and why. Vishnu, this month’s Cover Boy, is her partner and they finally welcomed a son to the world in February of 2016. On January 4 of this year, Asha gave birth to another little boy, whom they tentatively named “NanTWO” which is rather adorable, I think. After a naming contest, he was given the name “Kiran”, which means “Ray of Light” in Sanskrit (“Ashakiran” means “Ray of Hope”). As Nandu is still at the Toronto Zoo it’s become rather difficult recently to catch a glimpse of Vishnu, as space is becoming a bit limited and he has to rotate into the indoor exhibit with Nandu, and with Asha and Kiran. But on a couple of exceptionally nice days in the late winter this year, I did spot him outside and had a few nice moments with him. The photo I used for this month’s calendar page was actually taken at a similar time of year, on February 1st of 2016 (two weeks before Nandu was born) on a very warm and sunny day. Because it was a softer winter’s light than I normally see Vishnu in, and because the sun was full, but low in the sky when I took the shot, I think this is my favourite picture ever of this handsome lad.

I took the photo at right on March 18 of this year. It was a lovely morning just two days before spring arrived (officially, at least) and Vishnu was out in the yard enjoying the late winter sun on his body. He did come over to see me when I called his name, but didn’t stay long and headed for this spot near the hay and with maximum sunlight. Many visitors to the Zoo have remarked on how red Kiran’s skin is – and Nandu’s before him – and I don’t think I had really thought all that much about it until I started looking more closely of my photos of Vishnu in direct sunlight. His skin reflects a lot more red than does Asha’s, so this must be where his sons get it from. And while we’re talking about his skin: take a close look at this photo. See the cut or scrape just over his left rear leg? In other photos from the same day, you can see two more of these abrasions on his right side as well. I’ve no idea where they came from – it could really be just about anything in his enclosure or outside – but I wanted to use them to show everyone just how soft and damageable a greater one-horned rhino’s skin really is.

A full-body shot of Vishnu using a flehmen response

In this shot above with Vishnu in a full-on flehmen response, you get a pretty good look at the body covering of an Indian (or greater one-horned) rhino. As I mentioned, despite its rugged appearance the skin of these huge animals is actually not that thick at all (unlike its cousins in Africa). I’ve been blessed more than once to have my hands on the head and haunches of both Vishnu and Ashakiran, and I can tell you they feel warm and quite malleable to the touch, especially near the folds. And about those folds: notice where they occur on the body. The first one is in the area of Vishnu’s heart and lungs; the rear is around the kidneys and liver and other organs. There are huge, drooping folds of skin under the throat area, and almost a “boilerplate” appearance on the hindquarters. These are all designed to protect the most vulnerable areas of a rhino’s body, so they aren’t accidentally pierced in a vital organ just going about their daily affairs. Also, their breeding process can be quite rough (I have never once seen either of Vishnu or Asha come away from mating with pristine skin and nothing bleeding) and it would be positively life-threatening without these extra layers of folded skin.

Here is a video of a relatively tame portion of Asha and Vishnu breeding. My apologies for the inane commentary from yours truly: I’d have just turned off the sound entirely but I really wanted everyone to hear the awesome noises these two were making. The deep grunting sounds were from Vishnu, as should be obvious from watching the video. However, a little less obvious is this: the higher-pitched squeaky, “whistling” noises were being made by Ashakiran – and when Vishnu was chasing her it really sounded like she was screaming, which is why you hear me saying “she’s ok” to a younger observer in the crowd.

Last September a few friends and I participated in the “Oasis Fun Run 5K” at the Zoo. It was a lot of fun, even despite the fact that the temperature was in the high 30s (over 90 for you Fahrenheit people) and I was dressed head-to-toe in a hammerhead shark costume. Ha ha… no, seriously. In any event, Sarah and I had booked ourselves into a really cool encounter later that afternoon with Vishnu. I had been hands-on with him a couple of times before – not as hands-on as I had been with Asha, of course – but it’s probably extremely bad luck (or something) to turn down an opportunity to do it again. And Sarah, for her part, had never had a chance to touch one of these beauties. So we plopped down $100 ($50 each) for rhino conservation and followed Keeper Ryan through a gate and into an area just beside the paddock for a chance to feed and pat and otherwise interact with Vishnu for about a half an hour or so (there were about a dozen of us altogether). The photos below are of Sarah and me, and also our friends Hilary and Lloyd. My fashionable blue bandana is actually a “cooling cloth” that I had been wearing pretty much all day at that point, and it was likely the only thing that kept me from getting heat stroke, a fate that befell poor Hilary not long after these shots were taken. Seriously, it was freaking hot that day. 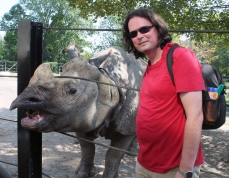 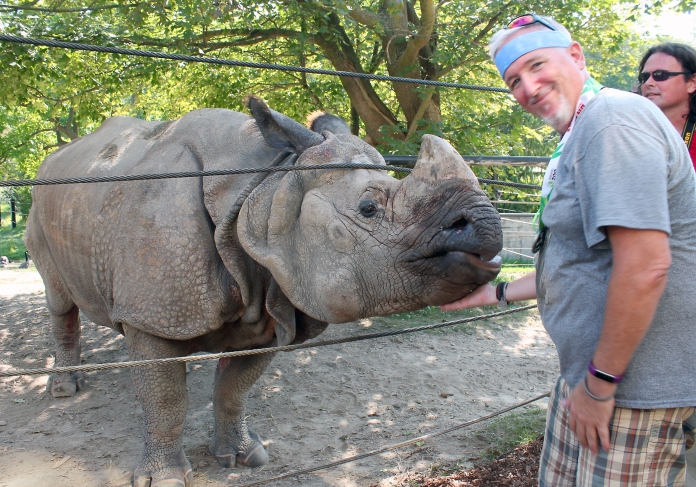 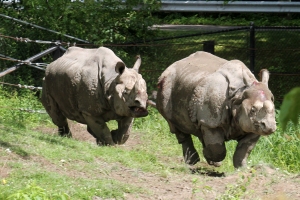 And on the subject of “rhino conservation”, the day after I took the photo of Vishnu lying down, on the 19th of March, the last remaining male northern white rhino in the world, Sudan, passed away at Ol Pejeta Conservancy in Kenya. There are two females left in this subspecies; once they are gone that will be it forever, unless science is able to work out a way to keep the subspecies going with stockpiled genetic material from Sudan and the girls. Just to be clear: the white rhinoceros has not gone extinct, just the northern white subspecies. In fact, the southern white rhino is still the most abundant in the world – although here I am using “abundant” rather ironically. Still, any opportunity to talk about the difficulties these amazing animals are facing at the hands of Humans is an opportunity not to be missed. Please do whatever you can to help stop the poaching of rhinos, elephants, tigers, and all the other creatures being slaughtered in the interests of fake medicine and ancient myths held by many cultures around the world. Educate yourself on their plight and speak up whenever you hear misinformation being spread. Don’t buy any products or souvenirs that have any connection with the killing of endangered species, and try to travel and shop wisely in your everyday lives. As you can see from the above photo, Vishnu and Ashakiran are working hard to do their part for the cause. Now it’s up to you. If you don’t know how to help, you can start by checking out Save The Rhino’s website.

Next month: oh, boy! This is the one photo that people who viewed my calendar in the fall universally paused at and commented on. A very special avian friend of mine is featured and I really think you will enjoy her story – even if some of you might challenge me on her name! See you in May and thanks for reading!