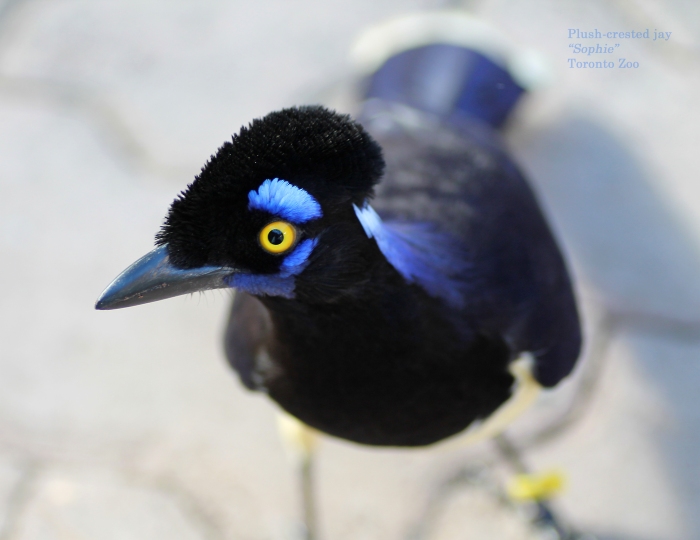 Some people call her “Arty” or “Artful Dodger”, but she’ll always be “Sophie” to me

Before I get into this blog piece proper: I mentioned at the end of last month’s post that this photo is the one that absolutely everyone who looked at my calendar last autumn stopped at and commented on. Full disclosure: when I was deciding on what shots to use in this year’s calendar, I wondered if this one would be too “artistic” to really be appreciated, and Sarah convinced me to keep it in. I have learned a valuable lesson about underestimating one’s audience. This is one of my favourite shots from my entire collection; I am thrilled it received the response it did. Thank you, all. 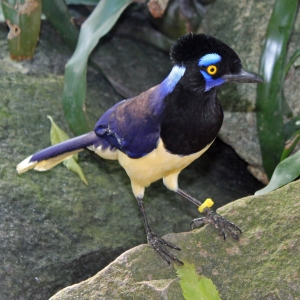 I first got to know this beautiful, precocious little creature early on in my Volunteerism at the Zoo. I used to especially love wandering around the Zoo with my camera in the wintertime, either after I had finished a shift or on an “off-day.” Often I would have a meal bar with me for lunch and I would pop into a pavilion to eat it while my camera lens defogged. I discovered quite quickly that the very best place to do this was in the free-flight aviary of the Americas Pavilion, for in those days the plush-crested jay made its home there and would always come and join me while I ate. At first I was certain it was a male because of its bright and striking colouring; I found out later that the plush-crested jay is not sexually dimorphic (meaning it’s monomorphic, but that seems to be a word in less-common usage) and that my little friend was, in fact, a female. I learned this in 2016, about a month after I had decided to name it “Bowie” in honour of the recent passing of the musical legend of the same name; it was a lot later that some Keeper – whose name now escapes me – told me her name was “Sophie”. A lot of other friends who know her had already settled on the name “Artful Dodger,” so I get quite a bit of push-back on “Sophie;” however, I see no reason why a creature this outgoing and spectacular shouldn’t have more than one name. 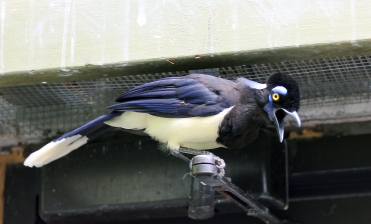 One of Sophie’s many calls

I didn’t need to have any food with me to attract Sophie’s attention – just some whistling and clicking of the tongue always brought her soaring over – but it didn’t take very many visits to work out that she absolutely loved the sound of the cellophane wrap on my meal bar. I can only imagine how many toddlers and adults alike she has terrorized over the years by swooping down out of nowhere at the sound of a bag of chips being opened or a package of cookies being devoured. I realized that I could simply rustle a candy wrapper in my pocket to get her to immediately come to me, but I didn’t actually start using that method until one particular lunch-time experience raised my level of respect for this clever bird immensely.

Tweeting at me near the entrance to the pavilion

Before I realized it was the sound that attracted Sophie more than the actual food per se, I would – and I’m not particularly proud of this – sort of “wave” my meal bar in the air after I had taken a bite out of it to see what she would do. Almost always this caused her to fly straight at my hand in an attempt to get at the food which, of course, I would always pull away before she could reach it. I enjoyed the closeness of her and the rush of wings flying past my face; Sophie, for her part, never seemed to tire of this game, either, so I convinced myself it was some sort of “enrichment” for her – which it likely was. I made sure never to do this with her if we weren’t completely alone in the aviary for I certainly didn’t want to encourage this sort of behaviour on a large scale. But since we both seemed to be enjoying our playtime together I figured, “what’s the harm?”

I love this perky expression

Of course it came to pass, eventually, that I would not be paying close enough attention to my surroundings while munching on my meal bar. Sophie saw an opportunity while I was checking my phone or getting my camera together or whatever, swooped in almost silently, and took the half-eaten meal bar right out of my hand. She grabbed it in her talons and whisked it away to the far end of the exhibit (by the pool, near the entrance to the rest of the pavilion, if you’re familiar with the area). I was mortified, naturally; not because I thought there was anything in the food that would do her any harm (there wasn’t) but because there was so very much of it left and I thought she might gorge on it and get very sick indeed. She had flown into an area off of the walkway, inaccessible from the path, so I was going to have to go and retrieve it from her. Naturally, several visitors chose that exact time to come through the aviary so I had to bide my time, watching her surreptitiously to be sure she wasn’t chowing down. When the coast was clear, however, I immediately stepped onto the substrate and grabbed the bar away from her (she was sitting on the ground next to it, having not eaten even a morsel). Relieved, I returned to my coat and camera bag, tugged the bar into a zippered pocket for later disposal, sat down, and began to breathe normally again. To this day I have absolutely no idea how she was able to take the food away so effortlessly and fly it such a distance. The bar was quite dense and, therefore, not particularly light. It was a truly impressive bit of ninja-like activity and it made me love her even more, truth be told. Yes, I realize I’m copping to a step (just one step, mind you) off the path into a restricted area, but I believe the fact that I was able to retrieve her pilfered foodstuff outweighs the momentary breach.

Checking me very carefully for food

Several months later – in the fall of that year – I was leading a tour to the otter exhibit, outside the Americas Pavilion. A special feeding was on the schedule for another group – a Grade 5 digestion class – and I wanted to include this in my own tour. When we arrived we discovered a flurry of activity taking place on the far side of the otter pond, involving a couple of Keepers, Maintenance workers, and several other staff members as well. We learned that they were all working to try to recapture the plush-crested jay, as she had escaped from the aviary and actually flown right out of the building. I found out later that they were at this task quite a long time (but were eventually successful); to this day I am convinced that, had I arrived on the scene without a tour group in tow, I would have begged them to let me try to get her to come to us by rustling some cellophane. I’ll bet it would have worked quite quickly, too. In any event, this apparently wasn’t the first time she had “flown the coop,” but it was to be her last. I didn’t see Sophie for a little while after that; when we once again crossed paths, she had been moved to a caged enclosure inside the main pavilion, backing onto the primate section, from which she would find it extremely difficult to escape again. I’ve never been happy with this turn of events and I’ve always felt just a little bit responsible for it on some level, although that’s patently absurd because she had gotten out into the woods more than one time before I ever came on the scene. Still…..

I don’t know the exact timing of Sophie’s move, but I can work out the parameters reasonably well. The two photos on this page that are extreme close-ups were most likely taken through the fencing of her current enclosure, and they were shot in January of 2015. All the others were taken before that date and all show her in the free-flight area. That narrows it down to a couple of months. But whenever it was, this much I do know: not all that long after she was moved to the caged enclosure a green aracari – similar to the one shown here – was returned to the Americas from the health unit and was placed in the same exhibit. The aracaris ordinarily dwell in the free-flight portion; this poor soul was kept from the others for a while, likely to avoid any bullying or competition for food. The aracari had some mobility issues which were quite painful to watch; several times I witnessed it attempting to hop up to its food dish – kept off of ground level to avoid having all the food eaten by the tinamous who also shared the enclosure – only to bump its head on the branch it was attempting to reach or simply toppling over altogether. It was heartbreaking the first time I saw it happening and I didn’t go back immediately. However, a few days later the news reached me that Sophie had taken note of the plight of the poor Aracari and was going into its food bowl and bringing it food. That’s right: Sophie was nursing an entirely different species of bird back to health. Of course I immediately rushed to the exhibit and witnessed it with my own eyes. Well, that is to say I witnessed it until I could no longer see through my tears. I adore this sweet bird and every story I hear about her is better than the one before.

One of the calls Sophie makes sounds like a “meow”; her body language here suggests to me that she might be doing just that in this photo

So for next month, I can tell you this: there may be better photos in this year’s calendar, but I doubt there are any cuter than the one for June. And just wait until you see the whole scene surrounding that close-up! Thanks for reading, and see you next month!