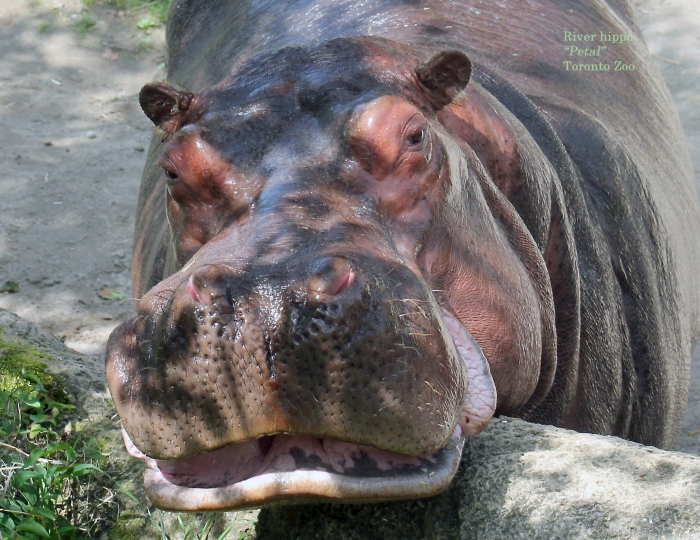 Nothing like a great big grin to make your day go better!

Perky II (back) and Petal

For much of my life, hippopotamuses have been the kind of animal I have always sort of taken for granted. Every large Zoo seems to have them; they are not often in motion, but rather lying on a cool patch of ground or leisurely floating about in their pond or wallow. As huge as they are, there was never really anything that stood out about them as a “must-see” species for me, even though I know I’d be very disappointed if they were to suddenly disappear from the Toronto Zoo (which is a very real possibility, given recent budget cuts, but that’s a story for another time). The hippo area was right next to the elephants when they lived in Toronto; now the neighbouring exhibit contains the giraffes. Both of these species seem to have more “cachet” and elicit excited chatter from guests, whereas the hippo exhibit has usually been a much more “Zen-like” experience and, consequentially, tends to be a more subdued area of the Zoo. This is most definitely not a bad thing; I am just saying that I really feel we as visitors have a tendency to not really engage very much with these ambling giants.

That all changed for me a few years ago, thanks to the dearly missed Samson and his amazing keeper, Alison. 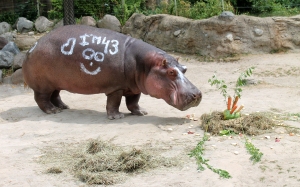 I first met Alison not long after the elephants were taken out of the control of the Toronto Zoo by a mob of zealots and sent to California. I was at the old giraffe house and ran into a couple of Keepers whom I didn’t know, but I made sure I shared with them how upset most of us were with the way they, in particular, had been treated during the whole debacle. Alison turned out to be one of the two I met that day, and she was overcome to the point of being speechless with grief over the loss. This endeared her to me immediately, of course, and after that encounter I made sure to stop at the hippo exhibit every time I saw her filling the pool or otherwise fixing things up, just to have a chat and see how things were going. I’m not 100% sure if hippos had always been such a huge (no pun intended) part of her life or if they replaced the hole the departure of the elephants left – if Alison is reading this, perhaps she would like to comment – but it was clear she absolutely adored the three that were in the Zoo’s collection: Samson and his two sisters, Petal and Perky II.

Sarah and I were fortunate enough, a few years ago, to be part of a behind-the-scenes opportunity in the hippo house. One thing that has always stood out for me about Zoo animals is they almost always look remarkably bigger if you can get up close to them than they do on exhibit (one notable exception being the giant pandas). Probably this has something to do with the tendency to be looking down into an enclosure when it comes to the bigger animals, as opposed to standing level with them. But seeing Samson in the house was on a whole other level of mind-numbing. I can vividly recall him appearing at the door of his “bedroom” with his mouth open, looking for a snack, and discovering that his bottom jaw was basically in line with my eyebrows. He was an overwhelming presence, and yet not even slightly frightening in any way. This is likely part of what makes the hippopotamus the most dangerous land animal in Africa: its apparently docile and unassuming nature can be quite disarming. Think about it: if you didn’t already know hippos were dangerous and you were at a watering hole when a bloat of them suddenly appeared, would you know enough to quickly get out of there, or might you stay nearby and take photos? Contrast your reaction to what you would likely do if it were a pride of lions approaching that same watering hole. I feel a big part of the large number of “deaths by hippo” each year is simply opportunity.

The biggest reason a hippo will attack a human is territorial aggression. Obviously, we are not a food source as the hippopotamus is 100% a herbivore (♫”Teacher says a hippo is a veg-e-tar-i-an”♫ – I Want a Hippopotamus for Christmas) but hippos will defend their personal space with a frightening combination of sharp teeth, speed, and surprising mobility when necessary. At the Zoo, of course, they seldom have reason to react aggressively as their only contact with humans is usually of a beneficial nature: feeding, cleaning, healing, brushing – all things that the hippo will most certainly enjoy. The three Keepers in this photo are all at the edge of the exhibit for Samson’s 43rd birthday party (his last, as it turned out, sadly) and were never in any danger of an attack. Similarly, when Sarah and I were in the hippo house, the only fear we had was of Samson needing to “do his business” and flinging it everywhere with his rapidly rotating tail – and trust me: that was a real concern. I have no doubt, however, that if some random moron were to jump into the river hippopotamus exhibit at any Zoo in the world, they would meet a swift and rather gruesome demise before anyone could come to their aid. (I would encourage all the idiots of the world to ignore my warning and try it out themselves, but it would likely also lead to the death of the animal who attacked them and that isn’t a trade I’d make for the lives of 1,000 stupid people.) 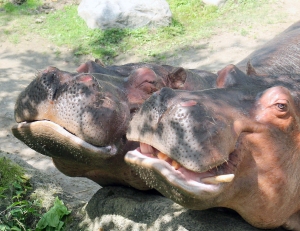 Ok, that’s enough of that. Let’s get back to the story at hand! When Samson was in the last years of his life, he suffered from a variety of aches and pains which he alleviated by spending a lot of time in the pool. He and his sisters would go out on alternating days: he alone and the girls together. Because I knew of his issues and was not sure how long he’d be around (he still lived to a good, old age), I tended to stop and talk to him when I saw him, but kind of pass the girls by if they were out and continue on to the rhino exhibit. As a result, he got to know my voice and would almost always respond if I called out to him from the railing. Here’s a fun story: when he celebrated his last birthday the Keepers painted (with zinc lotion, I believe) a few cool things on his massive frame, such as “I’m 43” and various hearts and smiley faces. One of the latter of these was on his rear end so that his tail formed a “nose” between two eyes. When he came out, I began to shoot a lot of photos of him, as I had promised Alison I would do. I didn’t notice the face on his backside until Alison called out to him to “show Steve the face on your bum,” at which point he looked first at her, then at me, then proceed to slowly turn away so that I could focus in on his tail. I clicked off a few frames… 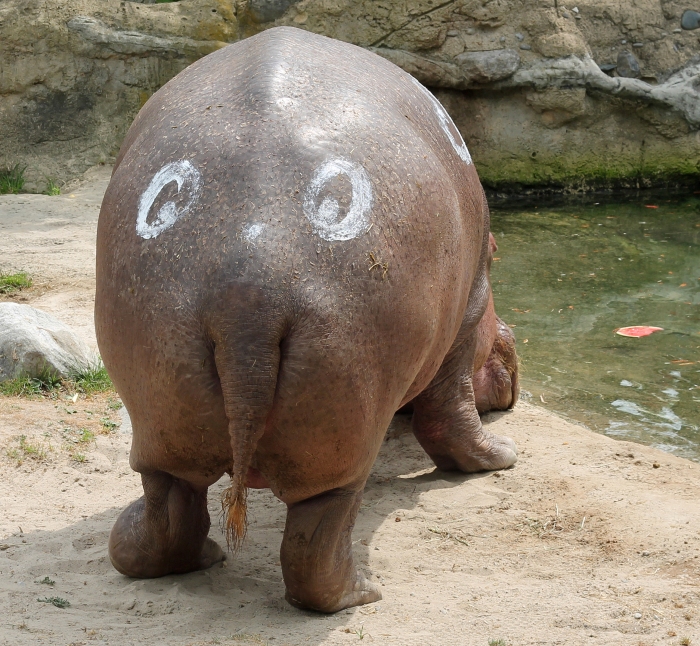 … and when my camera stopped making noise, Samson turned back to look at me to be sure I was done, before shuffling off into his beloved pool, with its many watermelon “lily pads,” courtesy of Frances, another one of his Keepers. I firmly believe this was not an accident; virtually every animal is far, far smarter than we will ever know – or, at least, give them credit for.

I call this “African Standoff”

Samson passed away in the winter of 2017, so it wasn’t until the warmer weather that I really felt his loss. When the hippos began to come out again, it was Petal and Perky II who were on exhibit every day and my old habit of glancing at them for a moment then continuing on returned for a while. Eventually I realized how silly that was, and I started to spend more time with the girls than ever before. Soon I was timing my visits to coincide with either a Keeper talk or some other sort of interaction (usually with Alison) in order to begin to get to know these two sisters better. This has proven to be a smart move, as I now have become smitten with the two ladies and, even more to the point, they seem to know my voice and associate me with Alison, so they are very responsive when I talk to them – on one notable occasion even surfacing to say “hi” while I was repeating their names to a couple of friends who were visiting with me. That was a beautiful moment.

I have to say, though: if you ever happen to be at the river hippo exhibit at the Toronto Zoo and Alison is there with her girls, it’s virtually impossible not to fall in love with them all. The affection they feel for each other is absolutely palpable; look at this photo on the right and you’ll see what I mean. In any other situation the sight of those enormous jaws opening wide would be heart-stopping, but here the peace and calm of the whole event are almost soothing. And if you are lucky enough to be there when any Keeper arrives packing a couple of watermelons, don’t go anywhere: you’re in for a big treat. Before I sign off here I’ll toss in a couple of photos with watermelons and one more where Petal is thrilled to discover that Alison has put in extensive exhibit work, piling in a giant pile of sand which quickly became Petal’s Favourite. Thing. Ever. By the way, here’s how to tell them apart: Petal, the older sister, has a small mark under her right eye that looks like a teardrop or a “petal”; she is older but the smaller of the two. Perky II – younger, bigger, seemingly more dominant – has a canine on her lower left that sticks out of her mouth at nearly a 90° angle.

Next month: there have so many incredible “aunts” at the Zoo the past few years. In August, I will tell you the story of one of them. Thanks for reading along and see you next month! 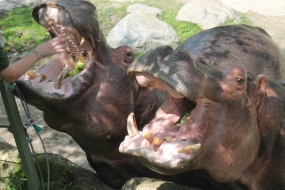