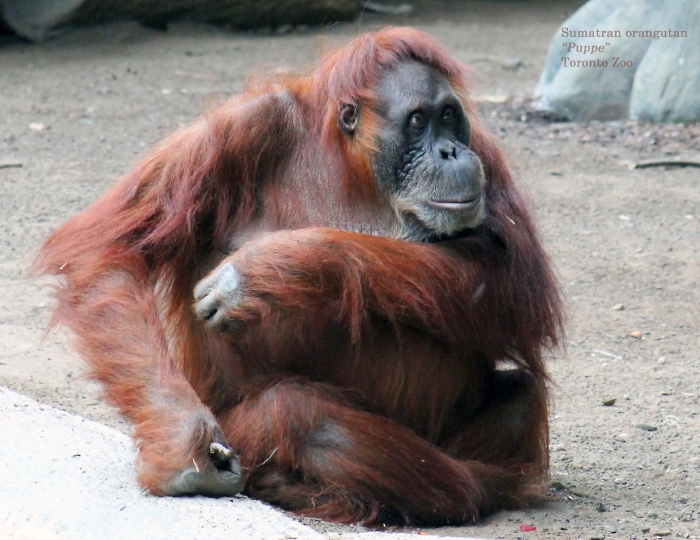 The Grand Dame of the orangs in Toronto, Puppe 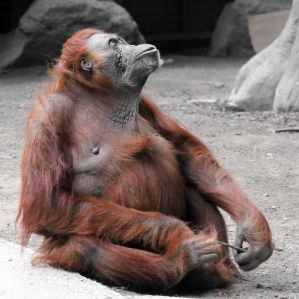 Puppe as an “Art Shot”

I’m going to level with you all here. I’m not a big primate fan. I don’t mean I’m not a fan of just “big primates;” I mean, you all probably realize by now I love all animals, but if I were to rank my favourite classes then I would have primates really quite low on that list. I’ve no idea why, to be honest. Obviously, it has something to do with their genetic closeness to humans; whether my general misanthropic nature (especially the past couple of decades) kicks in around primates, or their human traits make me uncomfortable, or any of myriad other possibilities are the reason, I just don’t spend much time with them, compared to virtually every other class of animals at the Zoo. I say that by way of apologizing in advance for the thinness of this post and that for the Baby Calendar this very same month (which ironically features a baby chimp). I won’t have very many photos to share with you, but I do have at least one terrific story about Puppe from way back in her early days in Toronto.

Budi as a juvenile

In 2014 I made my first annual photo calendar. Well, okay: if you want to be pedantic (like me) then I actually made it in 2013… but it was for 2014. In any event, that first calendar was not for public purchase: I printed a couple of dozen copies and gave them to friends and family as Christmas presents or just for fun. It was well-received, though, and a couple of people – most notably Adam, the best photographer amongst my peers at that time – suggested I should sell it from then on. So in 2014 I did just that and gave a chunk of the proceeds to the fund for the construction of a new outdoor habitat for the Toronto Zoo’s orangutans. As a result of our large donation (I funnelled my own contribution through our Volunteer group) the Friday Volunteers were invited to take a wonderful behind-the-scenes tour with a couple of the Indo Keepers in early 2015. But my original point here: the photo above and to the right of one of Puppe’s offspring – Budi – was one I featured in that 2014 calendar, and I would like you here to take particular notice of the black tub that Budi is sitting on. And now let me segue into one of the very best Zoo stories I have ever heard.

Puppe was born in Sumatra sometime in 1967. She has been at the Toronto Zoo since before it opened in 1974 (I believe she arrived in September of 1973). She is ridiculously smart and playful and, although time has slowed her down considerably, her bright eyes still flash her intelligence and I caught her climbing to the very top of their gymnasium just a few months ago. But her most fondly remembered escapade occurred not too long after the Zoo opened for business. I have heard several variations on this story, but a couple of years ago I asked a long-time Keeper to fill me in as best she could, and here is the most accurate version I know. In those days, it was common practice to leave some of the species on their exhibits overnight. There is a moat around the orangutan exhibit (as there is in front of the gibbons’) because most primates cannot swim and this enables visitors to have an unobstructed view of the orangs across the water. Puppe took particular interest in this body of water to the point where she was able to imagine it as an escape route. One morning when the Keepers came in for work, they discovered Puppe missing from the exhibit. The only clue they had was a black plastic tub (similar to the one in the photo of Budi above but a bit smaller) floating in the water near the railing. When they searched the rest of the building, they discovered Puppe hanging about in the rafters of the roof, happy as a clam. (There is a version of this story that has her snapping off light bulbs and throwing them at the Keepers, but I cannot confirm this little twist so it may well be apocryphal.) They managed to coax Puppe down and returned her to her home. If you visit the orangutans these days you will see black tubs for hiding in within the confines of their exhibit, but these all have holes drilled in them so they won’t float, and they are all bolted down to the wooden construction. I don’t think she’ll be able to replicate the feat… but it’s entirely possible she’s spent the past 40+ years learning how to use a ratchet and waiting for her opportunity to arrive. 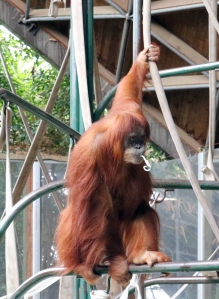 Puppe (which means “little doll” in German) and her ilk have lots of issues in the wild, including poaching and climate change, but by far the single biggest threat to the global orangutan population is the destruction of rainforests for palm oil plantations. I will spare you here the several paragraphs I could write about the horrors associated with this industry; in lieu of that, however, I urge you to please do your own research and educate yourselves on this issue. A good place to start is with the site “Say No to Palm Oil.” The World Wildlife Fund has some excellent information as well. The Toronto Zoo has a statement on its website concerning this issue; the site for the Roundtable for Sustainable Palm Oil gives you great advice on how to shop in a way that lets you help stop the damage being done to the rainforest habitats of the world. I knew nothing of this issue before I began Volunteering at the Zoo, but simply put it is one of the greatest threats to the rainforests of this planet – and as the rainforests go, so does humanity. They are irreplaceable in a timeframe that would allow life as we know it to continue to survive on this planet. I know it’s very difficult to feel the impact of something that’s happening basically on the other side of the world, but there are small, specific things you can do here to make an impact. Please check those sites out, and do some more discovery for yourselves.

Ok, I know that was a harsh paragraph to read, but please trust me: it’s of vital importance that everyone has at least a rudimentary understanding of this crucial issue. Manufacturers still aren’t really getting it; every stop I make in the cookie aisle yields merely a handful of palm-oil-free options for me to consider and progress in this area has been extremely slow. As a reward for hanging in there, here is another shot of the beautiful Puppe, one which barely didn’t make the cut for this month’s featured photo. And as you look at this, I will tell you that orangutans (which means “old men of the forest”) and humans share 97% of their DNA. These great apes (not monkeys, because all monkeys have tails) are not quite as similar as chimps (who share a whopping 99% of our DNA), but some studies have shown that particular DNA strands in the orangutan are actually more similar to ours than even a chimp’s. Food for thought. As long as that food contains what? That’s right: sustainable palm oil, or none at all.

Thank you for paying attention!

Next month: on the road again with one of my favourite animals. No, not Sarah, although that’s not wrong, either. This one has an even cuter walk. Hope you can join me then!