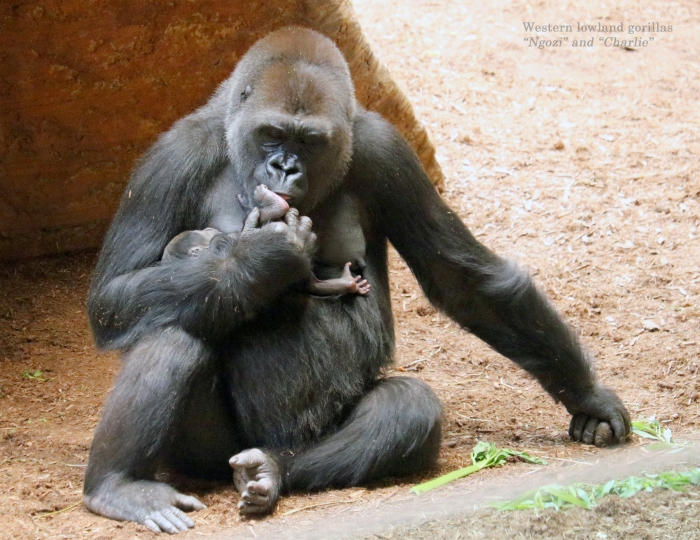 Charlie is only a few hours old when I took this shot.

Longtime readers of these blog posts – and many other Zoo friends, as well – will be familiar with the story of how I missed the arrival of Nneka, Charles and Ngozi’s previous baby, born in January of 2014. If you do not fit into one or both of those groups (or if you need a quick refresher), I wrote about it in a post back in January 2017. I had no intention of making the same mistake twice. So when I received a “head’s up” from someone on the inside early in the morning of June 7, 2018, that Ngozi had just given birth again (confirmed by the Zoo itself on Facebook later that morning), I knew my after-work plans were sorted. When my shift was done, I raced home, grabbed my camera, and high-tailed it to the Zoo to see if Mama Ngozi would be out on exhibit with her new treasure.

Nneka checking out her new sister

She absolutely was, along with a few other exhausted gorillas who had all clearly been up much of the night through the birth process, as they live in close quarters off exhibit. The one exception might possibly have been big sister Nneka, who was fascinated by this tiny creature and didn’t venture far from her Mom and sister for most of the time I was there. Papa Charles was splayed out at the bottom of the hill, near where he usually sits when they are inside, and if I could have managed to get a tight zoom on his face, I am virtually certain I would have seen a trail of drool from his lip to the ground. He was out. Josephine, having been through this several times with her own babies and others’, was asleep but just in her normal spot, albeit with a forearm draped wearily across her brow. And Johari was out of sight for much of the time, occasionally passing into view to grab something to munch on, before retreating again into the shadows for some peace and quiet.

I had a big advantage that day, because I had gone into work early and, therefore, was able to finish early. As a result, I spent a good chunk of the afternoon at the gorilla exhibit before most other people got home from work or school, saw the news about the baby, and made it out to the Zoo. I’m sure the surrounding calmness made Ngozi comfortable enough to remain in plain sight, for the most part, and I was able to move about quite freely to try to grab the shots I wanted. Couple that with the flip-out display on the new(er) camera and you have the recipe for a satisfying visit! After a few hours of absorbing the wonder of the tiny gorilla. I began to notice the area around the exhibit filling up slowly with other visitors. I took a few last shots and quietly slipped out.

It was a beautiful spring day

In preparing for this blog post, I went back to my photo file for June 7 of last year to review all the shots I took of Charlie that day. I noticed that I took a total of 1,029 (!) photos that day; two of them were of the two Arctic fox boys (Elsa had not yet arrived) and four were of the robin you see here. Incredibly – but not really, if you know me well – only 260 of the remaining 1,023 snapshots I took that day were of Charlie and her family. A full 763 were of my obsession at the time: the Arctic wolf cubs and their family. There’s even more to the story: I arrived at the gorillas (according to the time stamps on my photos) around 1:15 and spent well over three hours there; I took nearly three times as many photos in about an hour and a half with the wolves. But even more incredibly, my favourite shot of the whole day was actually not the one of Ngozi and Charlie which I featured on this month in my calendar, but rather this photo of the wolves: 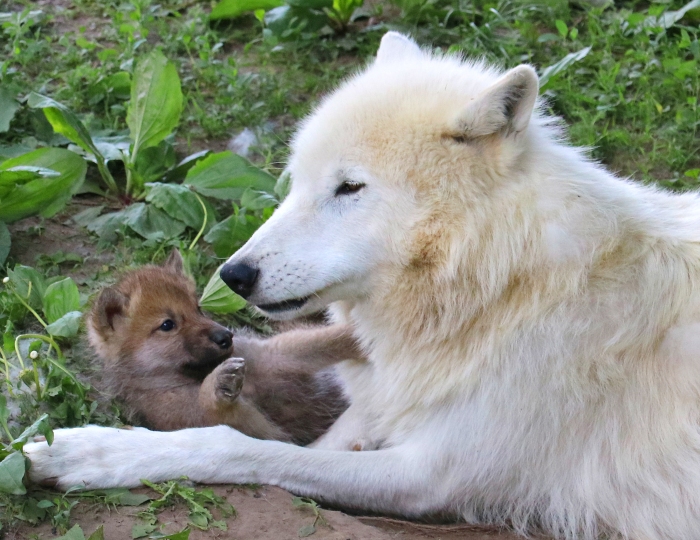 Look familiar? It should: it was the photo I featured in May in this very same calendar! Which means that two of this year’s calendar’s photos were taken on the same day, a little under four hours apart. I’m not sure that’s ever happened for any of my calendars; now, obviously, I am going to have to look into it and report back next month. 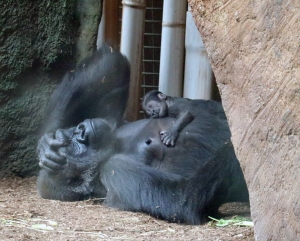 One week old and still sleepy

For years, every gorilla born at the Toronto Zoo received a name that began with the same first letter as its mother’s. Sadiki’s Mom was Samantha; Nassir and Nneka were born to Ngozi; Johari is Josephine’s daughter. (This is by no means a complete list.) This time, however, the Keepers all decided to break with tradition and name their newest addition after its father; hence, “Charlie” was going to be the name no matter what the sex would turn out to be of the baby. Papa Charles was 46 when Charlie was born, so it’s understandable that the prevailing thought is that this will likely be his last offspring (unless he suddenly turns into Anthony Quinn or something). I’ll admit I wasn’t all that impressed when I learned that the baby was a girl and that her name was “Charlie” in a relatively short interval; however, the name quickly grew on me and I honestly can’t imagine her being named anything else, now.

Like her big brother – Nassir – before her, Nneka went through a range of emotions over the first few months of Charlie’s life. At first, she was tremendously interested; when it became apparent that Charlie was here to stay and usurping her position as the baby of the family, she began to act out a little. But eventually, all she wanted to do was get Charlie to herself, just as Nassir did with her. The biggest difference I noticed was that Nassir wanted to be a protector and playmate for Nneka, while Nneka seemed to want Charlie to be her baby. Nassir would take Nneka when time allowed, whereas Nneka would (and still does) pounce on every moment where she can grab Charlie and whisk her away from Mom and the others, jealously guarding her chance for as long as she can possibly get away with. It’s not that she’s ever incautious when looking after her baby sister, it’s just that she simply doesn’t want to give her back!

I’m going to leave off here, with a couple of additional photos that I really like. One of them is the most recent one I have of Charlie, taken while lying on her Mom’s belly in early June of this year, playing the “air drums” on her own chest:

Nneka beating to her own drummer

The last three are a little more profound. They’re not great shots, in and of themselves, but they capture an almost unbearably sweet moment at the end of Charlie’s first day on this planet, when her Papa, Charles, comes over to take a closer look at his latest creation. This was in the “day room” where the troop goes between exhibit time and bed time. 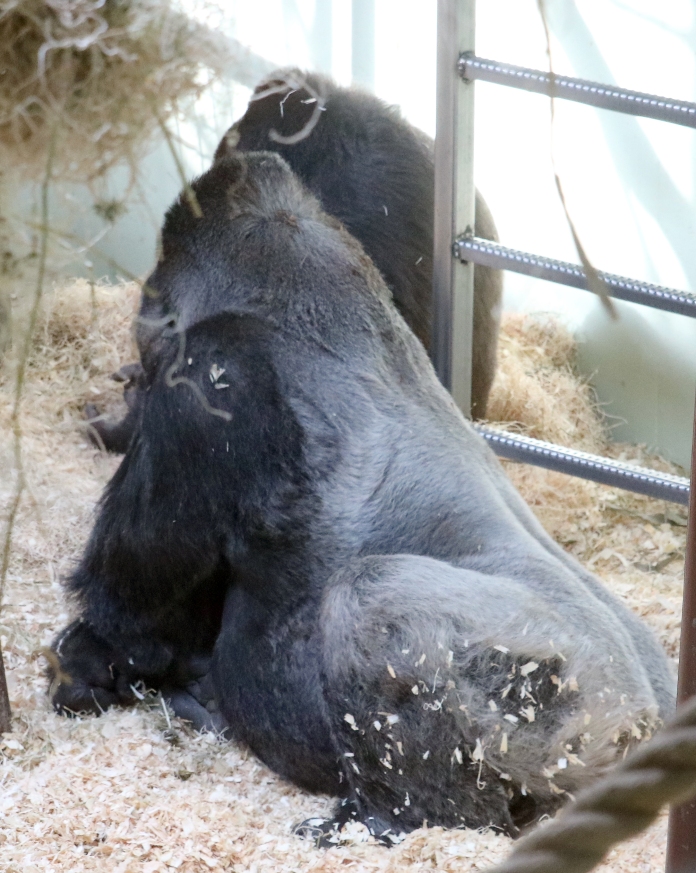 Next month: the return of a previously-featured subject. I hope you don’t mind! Let’s see if I can come up with some new stories about this fluffy boy. At least there will be new photos! As always, thanks for reading. See you in August!