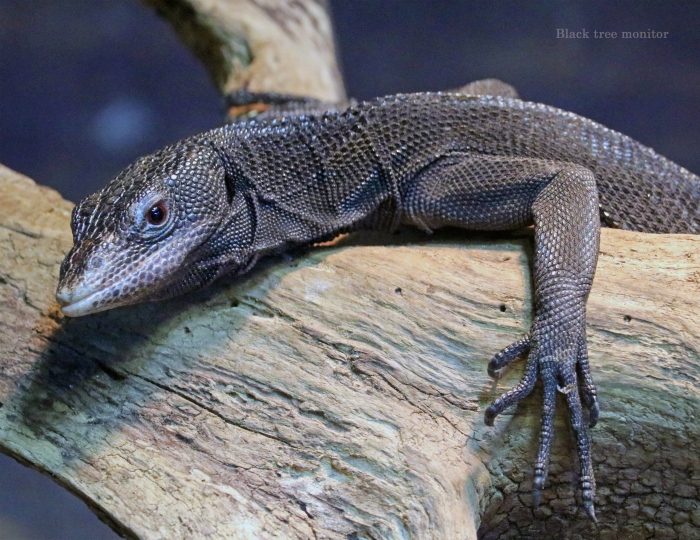 ♫ Wake me up, when September ends.♫

Well, I wish I had posted that song yesterday, because I somehow missed that today was the first of the month… so this post is later than it should have been. Sorry, all! 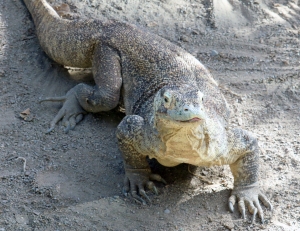 Anyhow, onwards and upwards! At the left is the photo I had originally intended to use for this month, but at the very last minute, I decided to go another direction. I really like this shot of Kiki; I just felt that there wasn’t much to it at the end of the day, and that the one of the monitor just stood out more on the page. Had I known then, in mid-October of 2018, that Kiki would pass away less than a week after I finished creating the calendar, I would most likely have used her photo and saved the monitor for 2020. However, hindsight is… well, 20/20… and I do think I used the more interesting photo… but I now find I have not very much to say about black tree monitors. (In fact, they’re not even currently listed among the Australasian animals on the Zoo’s new website, even though I know I saw them there the last time I visited the pavilion.) I think I will talk about the Australasian pavilion in general, and I will continue first with more about Kiki. 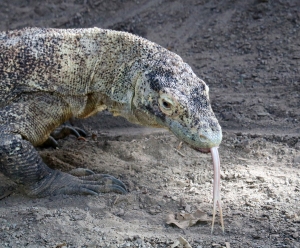 When I first began my training to be a Zoo Volunteer, I found I was visiting the Australasia Pavilion quite frequently after class was over. Part of the reason, I’m sure, was that it was a colder time of year; part was likely because it wasn’t an area I was very familiar with. Also, one of the very first Volunteer talks I attended was delivered by Brent, who was at that time a Keeper in Australasia and quite involved in the potential breeding of the Komodo dragons. Prior to the arrival of Kiki in June of 2011, the exhibit was shared by Kilat (who was born in Toronto in 2004) and Loca (spelling seems to be in question), who was potentially his mom and who, when she died at the Calgary Zoo in 2014, was the oldest Komodo dragon in captivity by a considerable margin. As there is a decent chance I will use a photo of Kilat in the future, I will refrain from writing any more about him here; however, there is a very interesting story about Kiki that bears repeating. 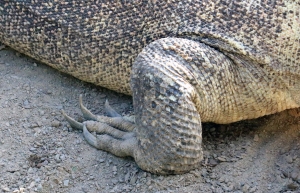 Look at those claws!

During that talk back in 2012, it was mentioned that the Zoo was having some trouble firmly establishing the sex of Kiki. She was considerably smaller than Kilat – alarmingly so – and it had been assumed that she would grow larger over time. If memory serves, she was even on a special diet to hopefully “bulk up,” but it never took. The few times she and Kilat were put together to breed she tried her best to avoid him, showing no interest whatsoever. Kilat would pursue her but nothing would really develop from it. When the Keepers drew blood from Kiki and sent it in to see if there were any issues keeping her that size, they received a startling surprise: the blood tests came back with the information that Kiki was a boy! Of course, they were not put back out together after that until the issue could be sorted out; when Kiki arrived in Toronto it had been pretty well-established over the six years of “her” life that she was female. So another test was ordered. This one came back “female,” again. But since Kiki clearly had no intention of breeding with Kilat, and was still quite small, they were kept apart from then on. It wasn’t until Kiki passed away on exhibit on October 23, 2018 and was sent for a necropsy that an even more stunning truth came out: Kiki was actually hermaphroditic; that is, she had sexual organs of both male and female types (but, in her case, neither was developed enough for breeding). This, of course, explained everything that had been so confusing over the previous seven years! 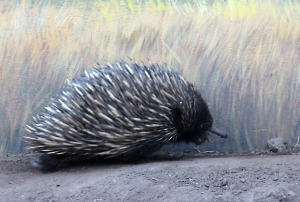 A favourite of mine (and many others) in that pavilion is the reclusive Annie, short-beaked echidna. Echidnas are one of only two types of monotremes in the world, with the other being the duck-billed platypus. Monotremes are egg-laying mammals; in the five class of vertebrates – mammals, birds, fish, reptiles, amphibians – not one of them is “perfect” in its classification rules; in other words, there are many exceptions. Annie used to live with Norman (I have always assumed that his full name must have been “Spiny Norman”) until he passed away a few years ago. Norman was easily distinguishable from Annie because he had a semi-permanent “snot bubble” hanging from the tip of his nose whenever anyone saw him. The echidnas spend most of the time the Zoo is open underground in tunnels, coming up for food around dusk each day which is pretty much the only time you might catch Annie. On the day I shot the above photo, I was in Australasia for the 34th (and final, as it turned out) birthday for Hamlet, who fell just four months short of being the longest-lived southern hairy-nosed wombat in history when he died later in 2016. While I was there I shot a video of Annie wandering around, which ends quite hilariously as I follow her into the area where Hamlet was and catch him lying on his back briefly:

Here is a shot of Hamlet on that 34th birthday; I don’t want to delve too much into the wombats as I feel they will likely feature in a future calendar: 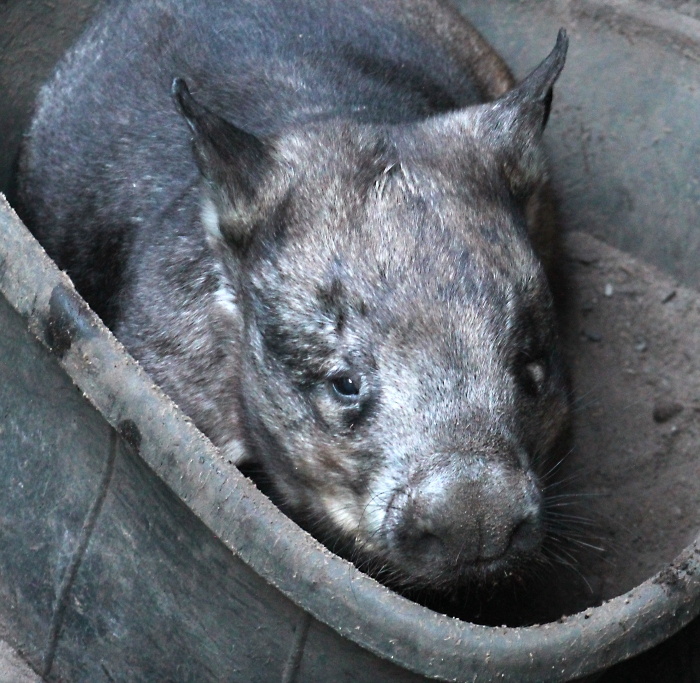 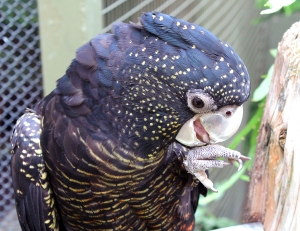 There have been some amazing birds in the Australasian Pavilion, too, but they seem to come and go a little more often (that’s probably just my impression). Here is Walnut, the red-tailed black cockatoo, who lived there with her parents for a while and then on her own, before she left for a breeding program. She was one of my favourites while she was here; she used to spend most of her time on the superstructure over the heads of visitors and would always respond happily to a quick whistle from a friend. She was also the central character in one of my favourite stories from the too-brief time I was a Program Leader at the Zoo. 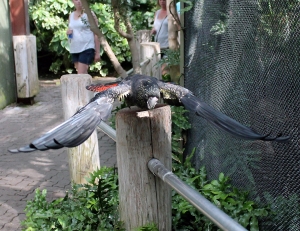 During one of my classes in the spring of 2016, a young lad (Grade 5 or 6, I think) asked me if we had any cockatoos at the Zoo, as he had one at home. (I assume his pet was the standard white one, but I never did ask.) I said we did, in fact, have one – and I would try my best to let him see her but I could not guarantee it as Australasia wasn’t on my planned tour route. We did the other side of the Zoo in the morning, and the young man asked me again at lunch if we might get to see Walnut in the afternoon. Again, I said I would try on the way back if I could. We visited the Tundra and the Americas after lunch and we were pushing our luck time-wise as we headed along the path back to the buses, when I caught the young man, out of the corner of my eye, wistfully gazing at the Australasia Pavilion we were passing close to. I made a quick decision and stopped the group, asking if they would be willing to really hustle back to the main gates if we made a brief detour so their classmate could see the cockatoo. They were unanimous in their agreement, so we turned left and headed into the pavilion. I could see Walnut in her customary place in the rafters and walked over until I was directly underneath her. A couple of the young people had seen her as well, but I urged them not to say anything for the moment. I asked the cockatoo-lover if he could see Walnut, but he could not, so I whistled briefly for her (“Yoo-hoo,” it sounds like) and she squawked a very happy, very loud reply. He stared up at her as she made her way a little closer to all of us and gazed at her in wonder for a few moments until it was really time to go. As I marched the class quickly back out of the pavilion and toward the gate, I looked back over my shoulder to see that young lad with an enormous grin on his face, surrounded by congratulatory classmates who were almost as excited as he was. Now, that… was a good day.

I’m very carefully avoiding the animals I expect will be in upcoming editions and, if you happen to follow me on social media, I am sure you can work out what is the most likely of those to be in the 2020 calendar. So I will leave the stories of the Australasia Pavilion here, for now, and just add a small collage at the end of some of my other favourites. Next month: I need to own up to not one…not two… but three errors in the caption for the photo. Go big or go home, right? That will teach me for using the one photo that was shot on my old camera.

See you in November and thanks for reading! 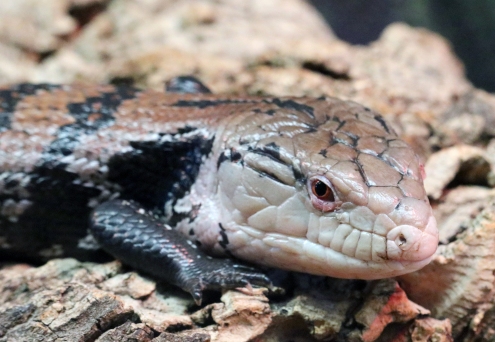 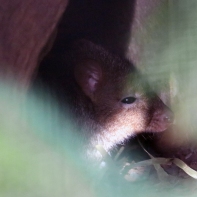 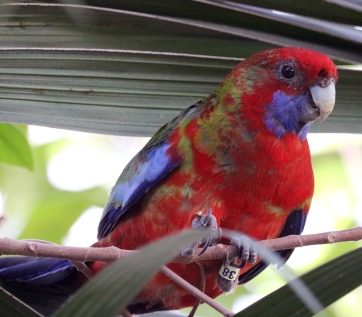 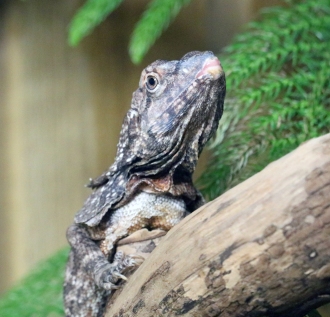 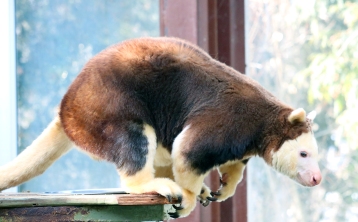 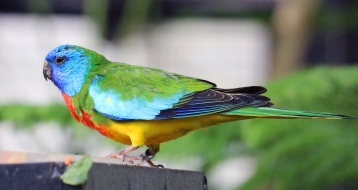 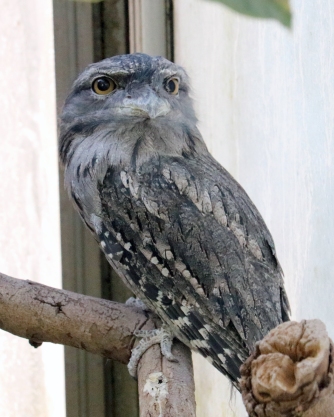