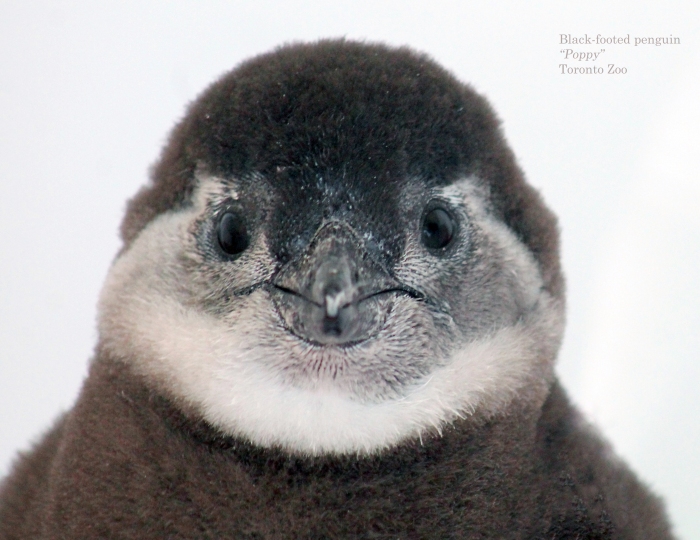 Poppy, one of the Zoo’s first batch of “third-generation” penguins!

Happy New Year! Welcome to the sequel to last year’s wildly successful Baby Boom! calendar. This edition was kind of a last-minute decision, as there were not nearly enough new babies at the Toronto Zoo this past year to carry a full calendar on their own, and also I had originally hoped to make the second calendar one of Keepers and their animals. The latter didn’t happen as I simply ran out of time (I wanted to be sure to ask each Keeper for permission to use their photo). But when I was going through some doldrums this past Fall and posed the question on Facebook as to whether or not I should put out a calendar this year (would there be enough interest to sustain it as one of my bigger markets had seemingly dried up), I was overwhelmed by the positive response and immediately set about creating the “main” calendar: THE GRUMPY PENGUIN calendar for 2018. And among those responses was one from my friend, Richard, who suggested that perhaps I didn’t need to only include animals from the Toronto Zoo this time around. So I took his advice and ran with it, creating this year’s Baby calendar from photos I had taken in several different Zoos.

But I wanted to lead off with a Toronto baby. And I found the perfect one, I think. 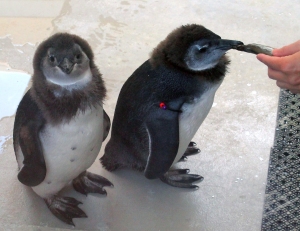 After an 18-year absence, black-footed (or “African” or “jackass”) penguins returned to the Toronto Zoo in 2011, with an original rookery of 12 adults. Those adults produced 13 offspring and two of the original 12 have passed away, leaving a total of 23 penguins heading into the winter of 2016-17. Late in 2016, for the first time, four of those offspring had matured to the point that they were ready to have babies of their own and they produced four viable eggs between them, which hatched out the Zoo’s first “grandbabies” from the original colony. The first ones to be born were “Sunflower” and “Poppy” (the calendar star for this month), and their parents are Matata (one of the first three offspring, born in 2012) and Thandiwe (one of the original dozen, born in 2007). The pair pictured here are Jagu (named after the wife of the Lead Hand for the inner Savanna team) and Glen (full name: Glen Phillips, named after the Savanna’s heroic plumber!). Their parents are Chupa (brother of Matata) and my favourite of all the offspring so far, Eldon – or “Ellie” – who was the first one born of all and who was thought to be a boy at first… until “he” laid “his” first (unviable) egg a couple of years ago! 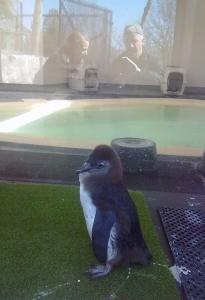 There are a couple of likely reasons that Eldon is my favourite of the babies. First of all, she was the very first one born and had to be hand-raised after her parents, Gozi and Puff, rejected the egg as it was hatching. So she had kind of a rough start to life, quite aside from being mis-gendered! Secondly, a couple of months later the brothers Chupa and Matata were hatched (to Colby and Greenbird) but they had each other for company, while Eldon was alone for much of her first few months of life. Once Eldon was set up in the nursery in the window of the indoor part of the penguin habitat, I would visit her as often as I could. Sarah was with me the very first time, as you can see in the photo at left, but more often I would be there alone. Eventually, Chupa and Matata took up residence in an adjoining nursery and would play with each other. I would often show up to find Eldon sitting on her side of the clear plastic barrier, watching the two younger babies grooming each other or cuddling. Of course I felt sorry for her immediately, so I took to finding ways to entertain her myself through the glass. One of our favourite “games” was when I would show up on a sunny day and use my watch or phone to reflect the sun to make a shiny patch on the ground in Eldon’s half of the exhibit. Once she noticed it, I would move it around so she could chase it and peck at it on the carpet. Chupa and Matata would inevitably notice this activiy and try to join in, but I almost always kept this particular game for just Eldon and me. I don’t imagine it caused any special bonding for Eldon toward me, but it sure worked going the other direction. 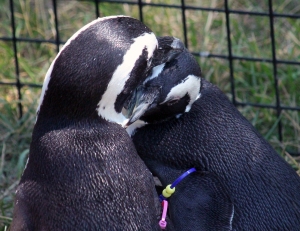 Breeding pairs are determined by something called the SSP – or Species Survival Plan – program and are out of the Zoo’s control, basically. So when my favourite, Ellie, began to court with the favourite (Scooby Doo) of my Keeper friend, Kim, it was sort of an “illicit affair”; “forbidden love,” if you will, and they were eventually split up to pair Ellie with Chupa. But while they were still “daring to dream”, Kim brought them out together one day for a penguin “Close Encounter”, just so I could see them together briefly. What a sweet thing to do! I took full advantage of this and snapped off shot after shot, culminating in the one you see here. They sure made an adorable couple! But, alas: their “star-crossed love” was not meant to be. 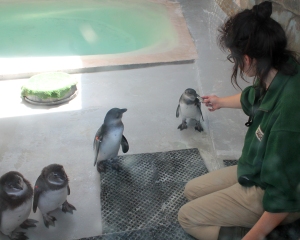 Rebecca and the four grandbabies

In the long run, it’s a good thing they were “re-paired.” Both Puff and Colby (moms to Eldon, and Chupa and Matata, respectively) have passed away so pairing up Ellie with one of the brothers will help keep their bloodlines going in the best possible way. And it clearly worked out: Ellie and Thandiwe laid two eggs each, and all four hatched out beautiful chicks. I’m especially proud of my Ellie: if I have the story correct, the eggs were all pulled when they were laid and given to other pairs to incubate (the moms who laid them were given “dummy eggs” to sit on) – all, that is, except for one. Ellie was allowed to keep the second of her pair and she performed splendidly, producing one of her two offspring to the very end of the hatching cycle! Something else to be excited about is the fact that three of the four newest additions to the colony of 27 penguins are female, which is welcome news after so many of last year’s Zoo babies were male. By the way, the other “incubators” I spoke of earlier were pairs Ziggy and DJ, and Squeak and Pedro. 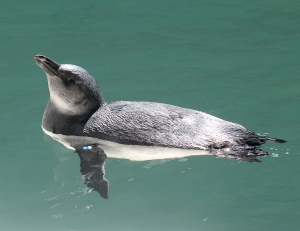 Poppy having a float

The four grandbabies have now grown enough to be able to spend all their time with their 23 relatives in the pool or in the inside exhibit. Last time I saw them there was still enough of the colour difference to be able to tell them apart from the mature adults, but I don’t expect that to be the case come Spring. The success of the Toronto Zoo’s breeding program for these adorable but endangered little birds is fantastic and speaks volumes for the incredible work the Keepers do there. As I have mentioned before – and which any of you who have known me longer than just a couple of years already knew – penguins have been my favourite creatures for most of my life and watching the interactions between all of the Keepers who work with them and the tiny denizens of the Zoo’s penguin exhibit is always heart-warming, to say the least. If you can get to one of the Close Encounters they often offer during the summer months, do yourself a favour and don’t miss it. Watching a couple of the Keepers come out with one or two of the younger birds in their arms, sit down on the grass, and let the penguins waddle off freely is a sight to melt the iciest heart.

That’s it for January! Next month: a baby of a species that is not technically part of the Toronto Zoo’s “collection,” but which has become fairly iconic as a “greeter” from the moment you first enter the Zoo’s grounds. I’ll leave you with a small collage of shots of the four penguin chicks: Poppy, Sunflower, Jagu, and Glen. Enjoy! 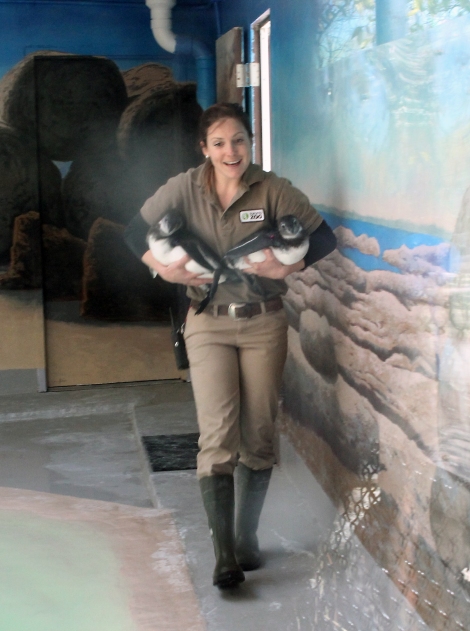 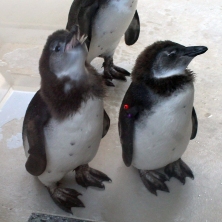 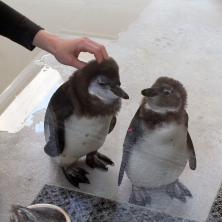 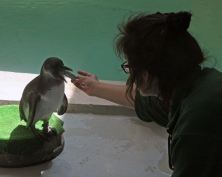 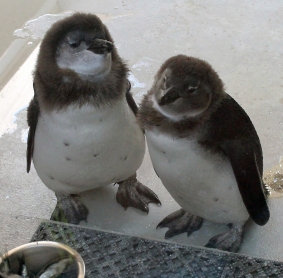 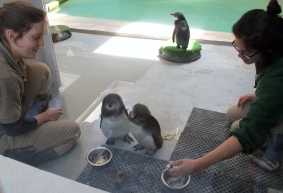 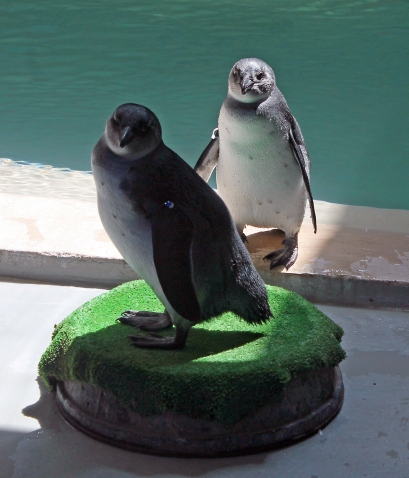 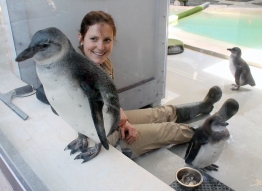 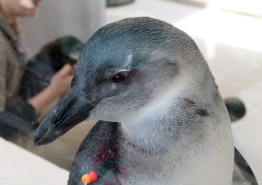 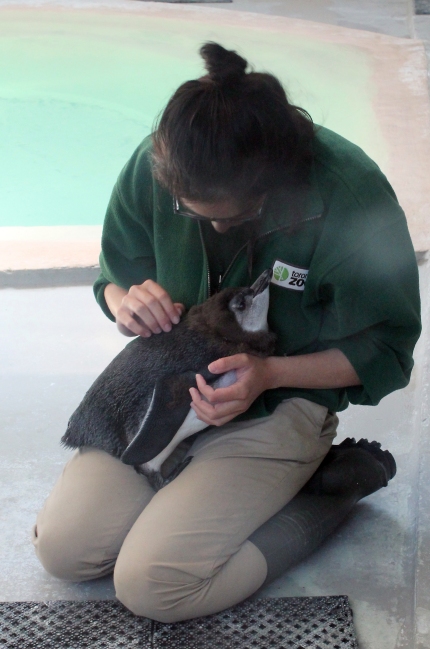 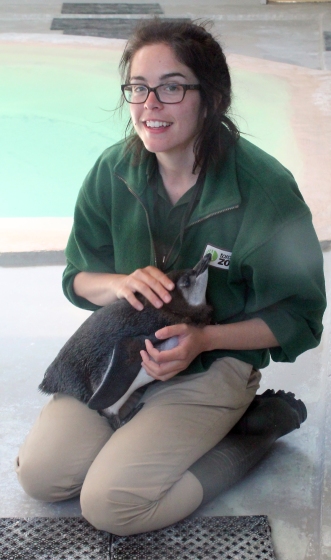 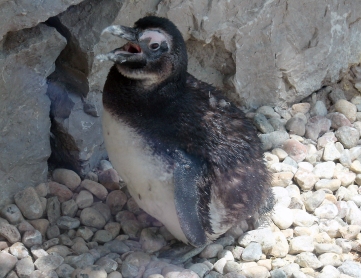 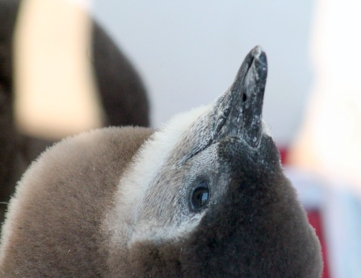 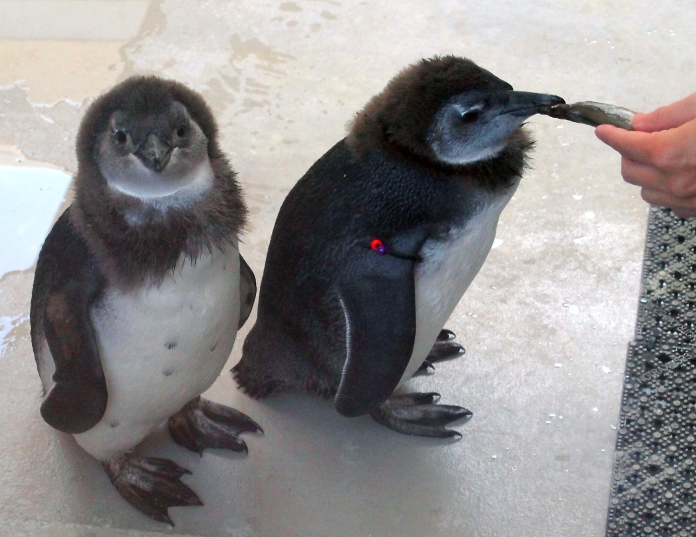